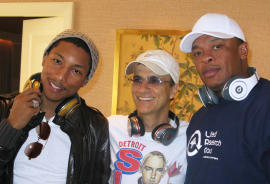 Pharrell, Jimmy Iovine and Dr. Dre pose with headphones from “Beats By Dr. Dre” made by Monster Cable. A new alliance between hip-hop impresario Dr. Dre, Interscope Chairman Jimmy Iovine, and computer maker Hewlett-Packard aims to save digital music. No, this is not an attempt to fix the record industry’s business woes. The goal is to lift the sound quality of the too-often tinny tunes squeaking out of our ear buds, and it’s an ambitious plan nonetheless. HP will release premium-priced laptops, headsets, and software featuring the “Beats By Dr. Dre” brand sometime this fall, music industry sources with knowledge of the offering told CNET News. In an interview last week, Iovine declined to discuss HP or any other company that may be involved. He confirmed, however, that he and Dr. Dre are part of a plan to reconstruct the entire “digital music ecosystem” from the sound file to the computer and culminating with high-end headsets.

The gear produced by Dr. Dre and Iovine doesn’t appear to come from some vanity project by would-be celebrity entrepreneurs. Dr. Dre and Iovine enlisted such artists as Pharrell, Will.i.am, and Gwen Stefani for coming up with the right sound and design of the Beats By Dr. Dre headphones, built by Monster Cable. Together they produced the “Tour” in-ear headphones that were rolled out last January and have since received critical success. “Monster Cable’s headphone collaboration with Dr. Dre, the Beats, surprised us with their musical prowess back in August,” wrote Slashgear last December. “While celebrity endorsements tend toward the cheesy, and Monster’s products toward the over-priced, we weren’t expecting much; in actual fact, they proved impressively capable.”