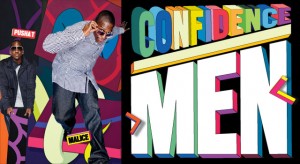 Pusha and Malice live in a world of their own devising. You’re welcome to visit, but don’t try to tell them they’re imagining things. Hip-hop may be an ever-changing beast, but one thing is constant: The Clipse’s sense of self. They might not be shouting it from the rooftops, but they clearly think they’re the best in the game—which is a little surprising, given their track record. After receiving a platinum plaque for their eerie and exceptionally witty debut, Lord Willin’, they fell into label purgatory. Four years and two mixtapes later, the even darker Hell Hath No Fury had critics and fans fawning, but still bricked like a Kwame Brown jumper. Despite the difficulties, Pusha T. and Malice still believe in the Clipse. And somehow, their bravado is understandable; it’s what’s gotten them here, after all.

When the Internet became saturated with no-name MCs and endless mixtapes, they concluded that fans value quality over quantity. When the economy cratered, they figured their fashion taste could sustain a clothing brand. And when they signed their Re-Up Gang label deal with Sony, they felt strong enough to branch out from under the Neptunes’ wings and recruit outside production for their third album, Til The Casket Drops. In fact, that unshakable certainty is probably why our boy KAWS jumped at the chance to design their album art (and this story). The whole thing may sound more crazy than confident, sure—but the best usually are.

Complex: It seems like Till The Casket Drops is very disconnected from the industry as a whole. Like, “Fuck that, this is what we’re on.”
Malice: This album is like redemption for me. We’ve been through so much with the label, with so much in our lives. Around Hell Hath No Fury, it was just rough times. You could probably hear it in the music. We had a lot of dead weight around us that got cleared out. This time around, everything is freer; we’re in a happier place. You can really hear the change in the music. Listen to “I’m Good.” You can feel it that we’re better. Definitely. Hell Hath No Fury is about when it was more raw. This album is more along the lines of Lord Willin’. And you know Hell Hath No Fury is my favorite album.

C: Is there any push to become more commercial this time around?
P: I don’t think so. Sonically, we always go above and beyond in our efforts to disrupt radio. It’s always about being different. Our radio is never conventional anyway. “Grindin’”—no hook, but big record. “Mr. Me Too”—very minimal.
M: “What Happened To That Boy.”
P: Yeah, you know. We’re always about being different. I like to call this album hip-hop on steroids, because everything is to the third power. The flow, the sound, everything is just in your face, and driving.

C: Lord Willin’ was responsible for bringing an emphasis on lyricism back to drug rap. Then, that whole style blew up and become commercialized over the last decade. As all that was happening, you guys were public about your disdain: “Fuck that other shit. That shit is wack.”
P: No, we’re just better.
M: [Laughs.]
P: Better than everybody else. That’s something that’s never going to stop—it’s competition to us. On an artistic level. That’s the essence of the art form. What is your view of the rap game at this very moment?
P: I mean…I like it.
M: I like it.

C: That sounded kinda apprehensive. You sounded much more genuine about it, Mal.
M: [Laughs.]
P: No, no, I like it because I listen to it…
M: For what it is…
P: For what it is, in its various settings. Like, I swag surf. I’m down. We’re from Virginia, which is Southern, but more East Coast-leaning rap. And people don’t understand how we can digest everything. Like, I like Plies. I’m into all that because I get to go to these places, and I get to see it. And when you can see anything, and see that they’re passionate about it there, then—…
M: You got to love it.
P: You got to love it. Because you know it ain’t no fraud. You know it’s not a fad, and it’s not just something stupid. People believe in that. So you got to rock with it. And it makes me a believer. You know, in its proper setting. That’s how I listen to it. I jam on that shit when that shit comes on in the club. I’m a partier, I’m into it. But I like rap where it is right now. I think everything is serving its purpose. These records are better than back in the days when Vanilla Ice was…
M: [Laughs.]
P: Like when Vanilla Ice was the novelty, or the Young MC or Skee-Lo, “Wish I was a little bit taller, wish I was a baller…” These records now to me are better than those. If you want to look at those as one-offs, but these guys got more. They got more records than those with just one. They do.

C: Let’s talk extracurricular activities. You guys have Play Cloths now, which seems to be doing pretty well. Where’d that come from?
P: This whole thing was born, honestly, by the fans. When we were doing the We Got It 4 Cheap series, we were doing shows packed with 500 or 1,000 kids per night. Not only were they reciting the words to the mixtape, but they were also pointing at the Bathing Ape jacket.

C: I remember you guys coming to St. John’s University years ago, maybe ’04; you were wearing Bapes and no one knew what it was. I was in the crowd, and all you could hear was, “What the fuck are they wearing? What’s that T-shirt? What’s that sweatshirt?” And then two years later, the shit explodes.
P: And then you start getting online, and then you start seeing what the hypebeast types are into. They were the ones who sort of nudged us in that direction. It was like, “Wait a minute. Y’all pay this much attention? This much?” We had to.

C: In this new age of the industry, where you have artists getting signed off one single, there are rappers just putting more and more music out. There are people on Nah Right that drop like 13 songs a week. You guys seem more…
M: Because we care about it, man. We can do everything they’re doing now. I mean, we can put out an album in a week. We can do that. But I wouldn’t be happy with it. I think our songs, our albums, singles, even the mixtapes, everything is handcrafted.
P: Yeah, I think that stuff sucks too.
M: [Laughs.]
P: All of that music I’m seeing every fucking day…all these 50,000 mixtapes. With not one gem on it.

C: Yeah, it makes it very disposable.
P: Come on…You’re ruining it. You’re pissing me off.
M: Then making 50 songs, and throwing away 30 that don’t make the album. It’s like, What were you thinking when you were writing those?
P: Stupid! Hey, stupid!
M: When we make a track, we loved it from the beginning.
P: Hey, dummy!

C: That’s a good point.
P: What’s wrong with you stupid? Who works like that?
M: What song do you make that you can throw away? What the hell is wrong with you?
P: Unless…
M: You knew it was doo-doo.
P: And they are real stupid…
M: And frivolous.
P: Pointless, meaningless…

C: Do the fans play into that at all?
M: Fans are everything. Fans are everything.
P: If they’re satisfied, they can keep everybody else satisfied, happy, and free.
M: For me it’s being able to look back at the body of work, and knowing that I stand behind it, being true to myself. The creativity that we have and the artistic value of our music, that’s what keeps us around. We may never skyrocket over the top, but…
P: We sold platinum before. Just not millions and millions and millions.