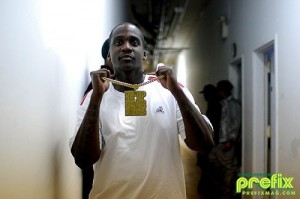 Surprise surprise, “Til The Casket Drops” has been pushed back again… The album is scheduled now for a November 10th release according to Prefixmag.com. The Clipse are caught in a position that is enviable and impossible all at once. Releasing Hell Hath No Fury was enough of a victory after the years it spent languishing in record-company limbo; that it delivered on the its considerable hype was just icing on the cake. The problem facing Malice and Pusha T is how to follow up an album championed by everybody from Christgau to XXL — Hell Hath No Fury is one of only six albums to achieve that magazine’s highest rating. The answer seems to be to call in a veritable Super Friends team of producers and give Cam’Ron a ring. We’ll know if it worked come Nov. 10, when Sony is scheduled to release ‘Til The Casket Drops.

Prefixmag: How do you follow up something like Hell Hath No Fury?
Clipse: It’s never any pressure to for us, because we didn’t set our sights on trying to outdo the last album. Our music is based on who we are at that time in our lives, and that’s why the energy in Hell Hath No Fury came from a hard place. We had to deal with all the political garbage that was happening and couldn’t concentrate on the more creative side of the music. It was all raw edges. This time around, we were in a much better place. Our fans will notice that this album is much more in the mindset of Lord Willin’.

P: How much of a vindication was it when the album finally came out?
C: I wasn’t worried about it coming out. I was more concerned that the people who supported us through our four-year sabbatical would get to hear the album. The fans were the ones who kept our name out there. There was a lot of stuff coming out, but we always had people backing us up, saying that our stuff would kill if it was out. We owed them big for that, so I’m glad for them that Hell Hath No Fury was finally released.

P: What effect did the ordeal have on the band?
C: We came to realize that his industry is a monster. Anybody who decides to do this as a career has to realize that it will have twists and turns. The only thing you can do is make the music you love to make and hope that it gets in the hands of passionate people who are willing to put it out.

P: Did it affect the recording of the new album?
C: It’s good to know that when you’re writing that somebody is going to hear the album. There was a rebellious side to Hell Hath No Fury, because I didn’t know when it was going to see the light of day. This time, I felt that lyrics were going to be heard immediately, and it was much more positive. There are already singles, and the singles are out there. There are a lot of heavy themes, but on the whole this is a much more coloforul album. It’s a street album.

P: Tell me about ‘Til The Casket Drops.
C: ‘Til The Casket Drops is something that we say at home in Virginia. It’s saying that it’s not over until it’s over. The hustle goes on forever. We did a song with Cam’Ron called “Back by Popular Demand.” It’s significant because we’ve both been out of the spotlight for a while, but we’re fully back. The lyrical cohesiveness is amazing. Both of us have been gone long enough. It’s time to show off.

P: Why did you decide to bring in producers other than The Neptunes this time around?
C: It wasn’t anything that was intentional. We found it to be very interesting to work with producers who were fans of the Clipse. They saw different aspects of our music and had different ideas about where we should be going. We met with a lot of good producers and got some great ideas from them. Then Pharrell came in and saw what was going on, and he stepped it up. He was creating in the studio because he took it as a challenge.

P: Tell me a little bit about working with Rick Rubin.
C: There’s a reason that man sits in his chair. We went to see him, and he had a lot of dope insight. He gave us some good advice. The most important thing he told us was not to cater to any specific audience and to make the album that we wanted to make.

P: Where does the Clipse go from here?
C: First we want to put out the album, and we have our clothing line, Play Cloths, out now. Eventually we’ll start working on the next Clipse album, and down the line we’d like to put out solo albums.

P: How would solo albums be different from the Clipse?
C: The big difference is with our rhyming styles and points of view. My brother is more concerned with the flyness and lyrical dopeness, the more competitive aspects of hip-hop. I am the consciousness. I give you the beginning and the end, even if it’s something you don’t expect. I’m not afraid to go a little deeper. This is something you’ll see on ‘Til The Casket Drops. There are a lot of true-to-life stories, and not all of them have happy endings. We’ve lost some family since the last album, and that’s something that I wanted to tackle lyrically.

P: What is wrong with hip-hop today?
C: There’s not enough balance today. There’s a lot of swag, and there’s nothing wrong with that, but another crowd misses that fundamental part of hip-hop. It’s not all about the party. There needs to be some lyrical food for thought. There’s a place for some more mature themes out there, too.