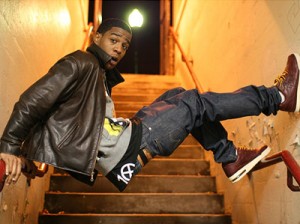 The Hip Hop Chronicle UK did a Interview with the G.O.O.D. Music Artist Kid Cudi where he talks about his new album “The Man On The Moon: End Of The Day” and reveals that he wants to release a “Compilation Album” named „Cudder“ after the album release where he is planning to work with the likes of Kenna, Green Day, The Neptunes, Robin Thicke and many others. Virgina rap duo The Clipse will be appearing on Kid Cudi’s forthcoming debut album „The Man On The Moon: The End Of Day“ which is sceduled for a September 15th release. Pusha T. of The Clipse recently revealed to Rap-Up.com that he has recorded a song for Cudi’s album called “Angels & Demons” which will also feature his brother Malice. Thanks To BucketOfNachos.