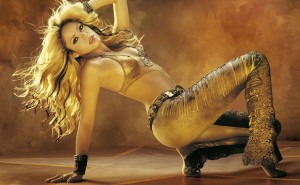 After giving some smashing hits on the Billboard, Shakira, the Latin diva is back. And this time it’s a new avatar ‘She Wolf‘ would be released in October 2009. So hold your breath as Shakira will sizzle with some jaw dropping moves. After giving some smashing hits like Whenever Wherever, Underneath, La Tortura, Beautiful Liar, Hips Don’t Lie with Wyclef Jean and many more on the billboard, Shakira is back with a massive package of some hit tracks and jaw dropping torques vertebrae moves. As the curtains lifted from Shakira’s disguise for her new album She Wolf, the singer’s 10 second teaser, went on to become a massive hit. The video unveils Shakira’s unusual imagination, when she composed the song. The tantalising music captivates the viewer’s attention; while Shakira’s saucy hip movements can’t obviously be ignored. Shakira is coming up with her new song ‘She Wolf‘ from her third English studio album She Wolf. Presenting a tight bond between art and artist. Featuring the metamorphosis of a woman told through her unique dance techniques. Folding herself in half, torques vertebrae, lifts legs over her head, pops her shoulders in and out of their sockets, hangs upside down, nearly topples over leaving everyone sweating. Thanks To Eclectic_E.

Did It Again (The Neptunes) (Preview)

Why Wait (The Neptunes) (Preview)