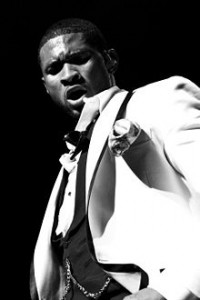 Midway through writing this post on Usher’s alleged next album Monster and it’s supposed release date of Dec. 8, the Rap-Up item announcing its street date (as well as a roster of collaborators that included Ne-Yo and Adam Levine) vanished. I might take that as a sign that, no, the record isn’t coming out then, but perhaps his people are actually trying to go for the scary element of surprise here, so as to make the creature alluded to by its title even more menacing? Or maybe they’re just holding off announcing the release date until they ensure that nothing as lousy as Here I Stand’s “Moving Mountains” makes its way to Monster’s final product, because, man, that song was terrible. The first single from the album is expected to impact American radio in late September or early October. The album is due December 8th.