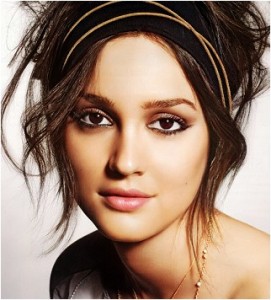 Update: October 2nd
Later this month, Leighton, 23, will be releasing her first single “Somebody To Love” off her much-anticipated debut album. As she revealed at the Emmy Awards, it’s an original duet with R&B crooner Robin Thicke. “Somebody To Love” is expected to hit radio on October 27.

Update: September 21st
On the red carpet at the Emmys, the 23-year-old Gossip Girl actress spilled that the first single from her much-anticipated album will be a collaboration with R&B crooner Robin Thicke. The song’s title has not yet been released but it sounds like it’s going to be groovy song. Leighton Marissa Meester 23, is an American actress and singer-songwriter, best known for her role as Blair Waldorf in the TV show Gossip Girl. In April 2009, Meester signed a recording contract with Universal Republic . It will include electronic music, and will be produced by several producers such as J.R. Rotem & Kara Dioguardi.