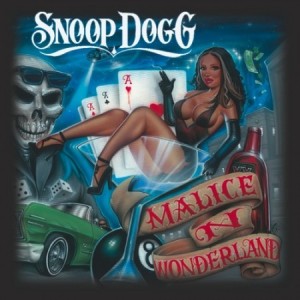 With ‘Gangsta Luv‘ officially dropping yesterday (October 20), Snoop Dogg is looking ahead to the release of his 10th studio album. Due December 8, ‘Malice N Wonderland‘ includes guest appearances by The-Dream, R. Kelly, Brandy, Jazmine Sullivan and Soulja Boy Tell Em. The album is Snoop‘s first since taking on the role of Creative Director for EMI’s newly relaunched Priority Records imprint. It’s also the first release for the reinvigorated label, which made a name for itself in the late-1980s and early ’90s for its street-level marketing of hip-hop releases, and distribution of Ruthless, No Limit, Death Row and other labels. Pharrell, Tricky, The-Dream, Lil Jon and Teddy Riley are among the producers he worked with to create the 12-track set, which Snoop says is set in two distinct sides of his persona, the dark and ganstga ‘Malice‘ and his lighter, friendlier flipside, ‘Wonderland.’

First single ‘Gangsta Luv‘ is part of the latter. Produced by Tricky and The-Dream, the cut is melodic and bouncy, with a feel-good groove. “I had to introduce the album with part of the ‘Wonderland‘ side,” Snoop says. “I wanted to have fun with this one — both in the studio and in the video. This is the first release for Priority Records and as the new Creative Chairman, as well as an artist on the label, it was only right to celebrate the re-launch with a feel-good anthem.”Snoop premiered a clip of the hysterical Paul Hunter — directed ‘Gangsta Luv‘ video during his stint as host of ‘WWE Raw‘ on Monday night. Hunter has directed Snoop in previous videos, including ‘Drop It Like It’s Hot‘ (featuring Pharrell) and ‘Signs‘ (featuring Justin Timberlake). He has also directed clips for everyone from rock groups All-American Rejects and Everclear to pop acts like Pussycat Dolls and Britney Spears. ‘Malice N Wonderland‘ is the follow-up to last year’s ‘Ego Trippin‘,’ which debuted at No. 3 on The Billboard 200 album chart on sales of 137,000 copies.