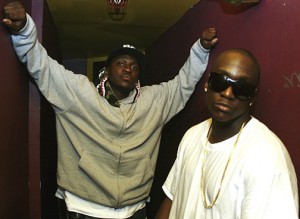 In case you couldn’t tell from our current Clipse cover story (yeah, this one), we’re pretty psyched for the return of Pusha T and Malice. Their long-awaited third album Til The Casket Drops is currently scheduled to drop on December 8, but Complex was lucky enough to hear a nearly-completed version of the album the other day. How do the Thornton brothers fare on their debut Columbia album, the first to feature producers outside of The Neptunes? Check out the complete track list and our initial thoughts on each song below…

01 – Speak Of Freedom (Sean C & LV)
An intense start to the album, the erratic, rapid-fire drums and guitar stabs create the perfect atmosphere for the duo’s urgent verses, ending with a distorted, angry rant: “Do I entertain you, motherfucker?”

02 – Popular Demand (Popeyes) feat. Pharrell & Cam’Ron (The Neptunes)
The collaboration everyone’s been waiting for definitely does not disappoint, with all three coke-friendly rappers in tight competition for the best verse. Production-wise, Pharrell and Chad drop a piano-heavy, mid-tempo neck-snapper that has a similar vibe to their recent Jay-Z cut “So Ambitious.”

03 – Kinda Like A Big Deal feat. Kanye West (DJ Khalil)
The so-called “street single” leaked from the album leaked back in April. Refresh your memory.

06 – There Was A Murder (DJ Khalil)
Clipse take it to the islands with this reggae-tinged track from Khalil about killing informants. Pusha even tries his hand at a little Patois flavor without completely embarrassing himself.

07 – Door Man feat. Pharrell (The Neptunes)
Possibly the closest thing to a Down South ballin’ record the duo has ever made—Pharrell comes through with an unexpectedly hard 808 thump, and the hook features a memorable boast: “Put my money on the roof and crush this bitch!”

08 – Never Will It Stop feat. Ab Liva (Sean C & LV)
Sandman might have left, but the remaining Re-Up Gang member still holds it down on this tough-talkin’ organ and synth banger. Throughout the album, Sean C & LV’s signature live instrumentation meshes surprisingly well with the Neptunes’ current sound.

09 – All Eyes On Me feat. Pharrell & Keri Hilson (The Neptunes)
Originally rumored to be the second “official” single, we’re not really sure now since it leaked back in June. Definitely one designed for the clubs, but it’s dope hearing P&M switch their flows up like this regardless.

10 – Counseling feat. Pharrell & Nicole Hurst (The Neptunes)
Like a lot of recent Neptunes stuff, this easy-going joint about relationships uses drums that hark back to the thump of classic ’90s East Coast hip-hop, mixing them with a more modern gradient synth sound.

11 – Champion feat. Pharrell (The Neptunes)
An 808-filled victory lap that features Pusha going back and forth with a female on the hook. The assault of snares on part of the beat definitely sounds similar to Lil Wayne’s “A Milli.” No shots!

12 – Footsteps (DJ Khalil)
Clipse go auto-tune? Don’t worry, Pusha and Malice don’t use the effect, but hookmaster Kobe (who’s also done tracks with Fabolous and Paul Wall) checks in on this joint about their trend-setting status.

13 – Life Change feat. Pharrell & Kenna (The Neptunes)
The album’s most introspective track closes things out with a slower synth chord progression and some harrowing verses about getting out of the crime life. “Last night, what I seen made my life change.”

14 – I’m Good feat. Pharrell & Rick Ross (Remix) (Bonus)
The official remix, with all-new verses. This is now our favorite Clipse song ever, thanks to Pusha’s line “G.I. Joe wrap my body on that Complex cover.” We’re so vain.