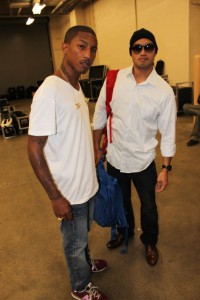 Here is an old Neptunes interview from from Trevor Nelson’s Rhythm Nation of 2001. Thanks to Spaceman. Chad Hugo and Pharrell Williams are two members of the hugely successful hip hop producers known as The Neptunes. Hailing from Virginia, they’ve worked with many successful acts over the last 5 years, from Janet Jackson to No Doubt. As NERD, Chad, Pharrell and Shay step up to the mic instead of sitting behind the mixing desk and the result so far is an album: ‘In Search Of…’ and their first single: ‘Lapdance‘.

Chad: NERD stands for No-one Ever Really Dies. We chose that name to keep it separate from The Neptunes entity, The Neptunes as producers NERD as artists.
Pharrell: As The Neptunes…
Chad: …we are like Spiderman!
Pharrell: and as NERD we’re like…
Chad: …Peter Parker. More personal y’know? None of the wall climbing business!

Trevor Nelson: What’s ‘Lapdance’ all about?
Pharrell: ‘Lapdance’ is actually not a sexual song at all. Lapdances are something that I like, but actually more importantly we were drawing a parallel between politicians and strippers and how politicians are no different, they do and say anything for money and once the money’s gone, so are they. So we just wanted to raise political awareness amongst the youth…
Chad: …and we did so by making a booty shaking anthem!
Pharrell: It’s cool because it’s something that you can hear in the clubs but at the same time it’s something that you can learn from when you’re just chillin’ – you know, you’re not looking at the video or listening to the song, you’re just singing the song to yourself and you realise it has nothing to do with sex. That’s a rewarding feeling for us as producers because we get a kick out of having people feel like they’re getting two for one.

TN: How did you meet?
P: We met in junior high and every day or every other day, we would go over to Chad’s house and play equipment and just come up with beats and ideas and tracks. We never really intended for it to go THIS far, but it just sorta ended up formulating into production.
C: We’ve always done it for fun, we ended up doing it as a job. Actually we got signed up as a group at first at future records with Teddy Riley who discovered us at a talent show. But over time we just started producing more and that’s where our niche was.

TN: What’s your favourite track on the album?
C: My favourite track on the album is ‘Stay Together’…
Pharrell: Yeah, ‘Stay Together’.
C: …’cos we definitely need to stay together.
P: Yeah, and it’s actually not about a girl, it’s about hip hop, and how hip hop influenced our lives and what it was to us when we were growing up and how its kinda like straying away. It’s kind of like serenading hip hop and everything that it meant to us.
C: This album was a blast to do ‘cos we didn’t have to worry about any boundaries and just did whatever the hell we wanted to do, we didn’t worry about fitting into any genre or anything like that, we just wanted to express ourselves freely.
P: Being a Neptune is all about exploring and discovering and that’s no matter what it is that you do – we just happen to be producers, like whatever it is that you do in your life be prepared to explore and discover, because if you’re not, then you’re sort of just running across stagnent territory, you’re doing a disservice to your soul, your soul is here to learn.

TN: What was it like working with Kelis?
P: Kelis? Well that’s just another facet of what it is that we try to do, and her new album is even crazier,
C: Yeah, stay tuned for that, it’s gonna be some electric crazy funk, retro crazy… CRAZY!
P: Whatever you call it…NERD
C: …crazy.

TN: What’s it like working with such a variety of artists?
P: We’re actually honestly really thankful for every artist that we work with, because you learn something different. We’ve done everything from N*SYNC to No Doubt, Backstreet Boys, Boys II Men – all kinds of stuff, and it’s like we’re about to work with Britney Spears. Hopefully the list will not end – it will continue until we die!