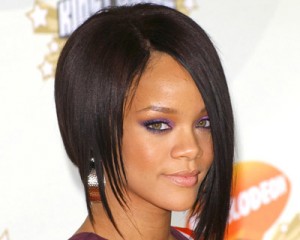 The Internet lit up late Tuesday afternoon (October 13) when Rihanna issued a super-brief tweet saying simply: “The Wait Is Ova. Nov 23 09. Of course, that message, which was accompanied by a metallic “R” logo, could mean a lot of things (the same message is posted on her Web site), but it seems very likely she’s talking about her forthcoming album, which “Umbrella” producer Tricky Stewart, who’s slated to hit the studio with Rihanna this month, told Rap-Up.com last week might be released this year. “I do believe it is [going to drop this year],” Stewart said. “We’re actually just getting started. I just wrote some records that I’m in love with this past week.

“Rihanna and I will be getting in the studio sometime in the next two weeks, so we actually have not recorded anything for her new album yet.” At press time, reps for Rihanna had not responded to requests for comment on the status of her new recordings. Rihanna has been working on new material with Justin Timberlake, Norwegian hitmakers Stargate, All-American Rejects‘ Tyson Ritter, The Neptunes and U.K. duo Chase & Status at various points this year. “The stuff we’ve come up with in the studio, it’s the next step for her. It’s a little more grown-up. It’s got some edge to it,” Timberlake said last month. The two previously collaborated on “Rehab,” from Rihanna’s Good Girl Gone Bad LP.

And Stewart said that despite the success of “Umbrella,” he and Rihanna have no intention of trying to repeat that song’s formula. “Man, you know we can’t do that. We come out with something that sounds like ‘Umbrella,’ they’re gonna be saying that we tried to do something that sounded like ‘Umbrella,’ ” he said. “That’s not what the great artists do. They don’t even allow you to do stuff like that. Every great artist always wants to hear something they’ve never heard before.” Stewart also said that Rihanna hasn’t changed since they first started working together. “She’s just a pleasure,” he said. “She’s a very sweet, down-to-earth person. You would never know how successful she is ’cause she’s just so nice and warm. I guess maybe it’s her background of being from the [Caribbean]. She’s just a really sweet, warm person to be around.”