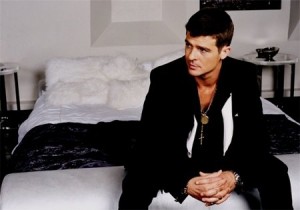 If the first single is any indication, Robin Thicke will be doing lots of sexual healing on his new album. The project has an official title and release date. The 32-year-old singer’s fourth studio effort will be released on December 8th, Rap-Up.com can confirm. The follow-up to last year’s Something Else will be titled Sex Therapy. The Polow Da Don-produced lead single of the same name goes to iTunes on October 20.

In addition to Polow, Thicke has been working with Jeff Bhasker, Scott Storch, and Surf Club on Sex Therapy, which he describes as “different than anything I’ve ever done before.”