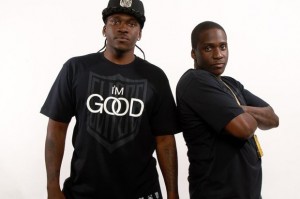 The list of nominees reads like an iPod party mix, so naturally, the 2009 mtvU Woodie Awards have lined up an eclectic list of performers and presenters too. Passion Pit and the Clipse featuring Cam’Ron and Rick Ross have just been confirmed to perform at the sixth-annual Woodies, joining already-announced acts Death Cab For Cutie, The Dead Weather and Matt & Kim. Breakout Woodie nominees Passion Pit will be performing their breakout single “The Reeling,” while the Clipse will take on a pair of tracks, teaming with Cam on “Popular Demand (Popeye’s)” and Ross for “I’m Good.”

The 2009 mtvU Woodie Awards will take place this Wednesday at the Roseland Ballroom in New York. The show will then premiere Friday, December 4, at 10 p.m. ET on mtvU, MTV, MTV2 and Palladia. Winners in all Woodies categories — like Woodie of the Year, the Breaking Woodie and the Left Field Woodie, to name just a few — are determined by you, the college music fan. Voting is still open through Monday over at Woodies.MTV.com and don’t forget to Vote for Kenna for The Good Woodie Award. Go Here to vote for Kenna.