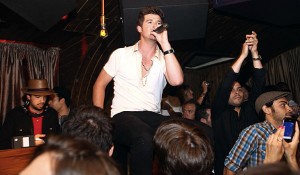 Robin Thicke was invited to perform at Saturday night’s Joslin Diabetes “High Hopes Gala” at the Seaport Hotel where he talked about hows been working with Michael Jackson back in 2004 on “Fall Again” for the “Ultimate Collection” and revealed that he was planned to open up the London concert for Michael Jackson with two performances. “It’s me singing all the background. I was 21 years old when that happened. That was the coolest moment,” he said. “He had asked me to open up for him in London for two performances. It would have become the coolest moment ever.”