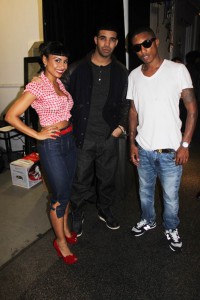 Young Money rapper Drake recently spoke on his highly anticipated debut album ‘Thank Me Later’. Drake revealed to Rap Up that his album is still in the early stages and divulged some of the artists he has reached out to for his solo project. “I sat down with Pharrell for a couple days, but it was very, very early in the recording process, so I wasn’t sonically sure what I wanted,” Drake revealed. “I’m about to sit with Timbaland.

Kanye and me have a lot of work to do together, and then other than them, just [Noah “40” Shebib] and Boi-1da who did the majority of [So Far Gone] with me.” Drake also revealed that the first single off his album will not be ‘Shut It Down” with R&B crooner The-Dream as previously reported. “No, it’s not the first single,” Drake divulged ” It deserves to be a single at some point, but it’s not the first single.” Drake hopes to have ‘Thank Me Later’ in stores in February but the album has no official release date.