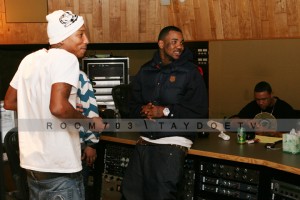 Update: 29th November
Here is a picture of Pharrell & Game in the studio, thanks to fantastical.

Update: 28th November
For stans of team Game eagerly anticipating R.E.D. season, the delay may very well be worth the wait. As previously reported, Games’ R.E.D. album was originally scheduled to be released December 8 but has since been pushed back to an early February release. Now Hurricane Game is releasing details on the forthcoming release via his @IHateGame twitter. Game tweeted about R.E.D. confirming that he would have an all-star production line up of Dr. Dre and Pharrell. He broke the news to his 85,000 plus followers saying, “The R.E.D. Album is gonna be classic, that’s a promise. Executive produced by Dr. Dre and Pharrell. The music is phenomenal.” Be on the lookout for Game’s “phenomenal” release early in the first quarter of next year.