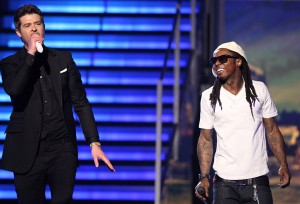 Robin Thicke is no stranger to working with Lil’ Wayne: The two have already collaborated a few times. Now the singer, who is currently putting the finishing touches on his December release, Sex Therapy, is hoping to get Wayne on another song in the very near future. “I’m just finishing it and I’m gonna send the album to Wayne to see if he wants to be [on it] ’cause he’s been on my last two albums and I’ve been on his last two,” he said. Thicke and Wayne first collaborated on “Shooter” and “All Night Long,” then hooked up again for “Tie My Hands.” “We’re kind of good luck charms for each other,” he said. “So I definitely want to get him on there to keep the good luck alive.”

In October, Lil’ Wayne pleaded guilty to felony gun possession, and he’s now scheduled to spend at least eight months in prison. But Thicke says he’s just focusing on all the amazing work that Wayne has contributed to the world of music. “He’s an amazing artist and a great friend,” he said when asked about the sentencing. “And we’re all supporting him through all of that.” Wayne isn’t the only MC on the album. Sex Therapy will also feature Kid Cudi, Snoop Dogg and Jay-Z, who Thicke was particularly excited to work with. “[It’s] kind of like a De La Soul kind of song, but [Jay] was really excited about it,” he told MTV News. “To work with him was a dream come true. It was one of the best days of my life.”