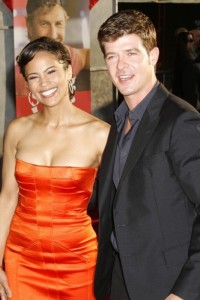 The Oscar buzz continues to mount for Lee Daniels’ “Precious: Based on the Novel Push by Sapphire,” as both the film and one of its stars, Paula Patton, took top honors at the 31st Aspen Filmfest, which ran from Sept. 30 to Oct. 4. “Precious” was named Audience Favorite Feature, while Patton, who attended the fest with her husband, singer Robin Thicke, won Artist To Watch. Paula who was so moved said “I cannot believe how far this film has come and I am so deeply honored by this award”. Nailing her character’s mind-set was harder than her looks. Patton didn’t know that Daniels wanted to offer her the part until her husband, R&B singer Robin Thicke, ran into him at a dinner party. The next day, he FedExed the script to his wife. It took her two weeks to read it because she was immersed in another film. But once she did, “I cried and I was scared because I loved it but I did not know how to play Ms. Rain so it’s not a cliché or boring.

There’s not a deep description of her even in the novel. And I think the last time I’ve been in a classroom was traffic school.” Luckily, she found two sources of inspiration. One was her mother, a teacher for 32 years in the Los Angeles public-school system before retiring. “I remember her bringing home kids from school and young girls for sleepovers, to get them out of their world and to see something else. She always did above and beyond.”