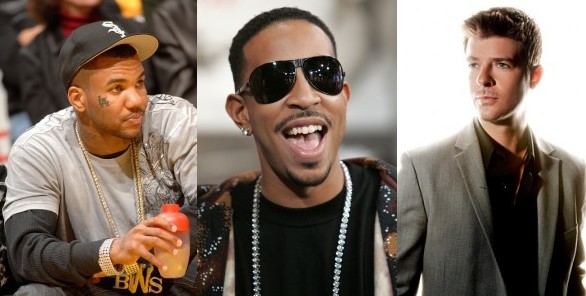 Game made a lot of noise with his upcoming collaboration with Justin Timberlake, but he’s also been in the studio with another blue-eyed soul man. Robin Thicke and the Compton rapper collaborated on “Diamonds,” a dedication to the women in their lives on Thicke’s new album Sex Therapy. Rap-Up TV spoke to Game about how the collabo came to be and how his mother will react once she hears it. “If you can get my mom to cry, man, that’s the shit,” he said. Despite their tumultuous relationship, Game’s mom listens to all his records. “She might think that I might diss her one day, so she be locked in waiting for the beef,” he explained. “Me and my moms, we had beef for a long time. She’s one of my worst enemies.” Thicke just released a remix with Ludacris off his first single ‘Sex Therapy’ in the meanwhile, Sex Therapy was at #4 on the charts straight out the box.