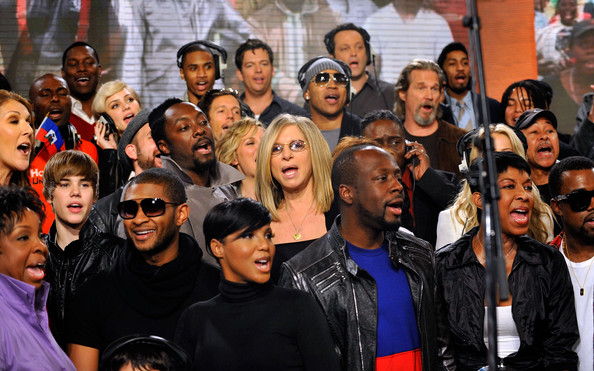 Although a serious cause brought celebrities from all entertainment fields together to remake ‘We Are The World‘, it didn’t mean they didn’t have a good time in the studio. And the source of much of that good time was Vince Vaughn, who kept the participants in stitches during the session. “Vince Vaughn is the coolest dude. He is hilarious,” Robin Thicke told MTV News. “He’s probably the smartest person in the whole room — even though he seems like a funny guy, he is brilliant. Me and Kid Cudi and Trey Songz and Tyrese, we were all cracking up with Vince Vaughn having a great time.”

Thicke enjoyed laughing with Vaughn without the pressure of having to worry about singing solo. “No, I didn’t have a solo part,” he explained. “I showed up as part of a chorus. It’s hard to take Barbra [Streisand’s] parts from her.” However, Thicke emphasized that the recording session was not just about hanging out and mingling, but about helping those in need. “It was just amazing, because as artists we’re always so selfish about videos and our tours and making money off it,” he said. “[The recording session] was a really unselfish endeavor …

and to see Snoop Dogg and Lil Wayne and Jeff Bridges and Celine Dion and Barbra Streisand all in the same 10 feet and all of singing ‘We Are The World‘. “And the great thing was for artists like myself and Kanye and Jamie Foxx, we all grew up watching ‘We Are The World‘ when we were kids and idolizing Michael and Prince and Springsteen, so for us to be the new ‘We Are The World‘, I think we were all kind of relishing it. We were all like kids in there and to be able to something good with our talents was for the right reasons.”

Producer Quincy Jones, the man behind the 1985 original song that featured Michael Jackson, Bruce Springsteen and others, confirmed the planned remake. “It’s the 25th anniversary and it’s perfect timing,” the legendary Jones said. “It’s not an accident, man. That’s God. It will be ‘We Are the World’ for Haiti.” Others rumored to be involved: Miley Cyrus, Bono, Lady Gaga, and Sheryl Crow. “Hope For Haiti Now” and other charities are still accepting relief donations.