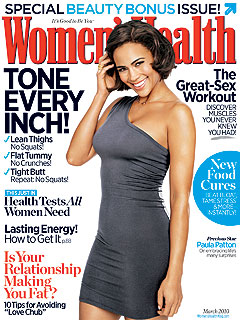 Bump watch is familiar territory for the women of Hollywood, but when whispers of a possible pregnancy for Paula Patton began circulating in 2008, the Precious star found it particularly painful. “That’s when you realize you do care what people think,” she tells the March issue of Women’s Health. Although she was not pregnant at the time – a baby doll dress and a few extra pounds ignited the rumors – Patton, 34, and husband Robin Thicke soon decided to take the plunge and pursue parenthood. “You can get into that cycle of ‘What’s next? What’s next?’ ” she says. “But I thought, ‘I want to have children and I’m not getting any younger.’ ”

Because she had been using birth control, Patton admits she worried they would experience difficulty conceiving a baby. Those fears were unfounded , however, for Thicke’s “super sperm” did the trick soon after the couple began trying. “He’s so proud of himself, it’s ridiculous,” Patton quips of her husband of four years. Expecting a boy in May, Patton says she is “trying to eat smart” with the hope of avoiding a prolonged struggle to lose the baby weight. “I try to eat a salad every day,” she reveals, “[and] I switched from drinking coffee to green tea.” Although she has developed an affinity for milkshakes, the actress keeps the craving in check by filling up with fruit or water beforehand.