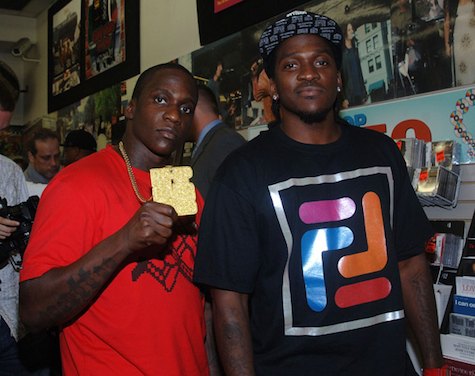 Stepping Out Of The Neptunes’ Shadow

For those seeking hip-hop that doesn’t adhere doggedly to a predefined schematic, there is a paucity of artists willing to breach their narrow topic boundaries and surprise the listener through deviation and morale juxtaposition. And then there is Clipse. Two brothers from Virginia Beach, Malice and Pusha T. (AKA Gene and Terrence Thornton) formed Clipse in the early Nineties as the East Coast sought to reaffirm its dominance over hip-hop’s sweaty sojourn in California. “When we first came out, it was all about New York – Virginia wasn’t really known for lyric driven hip-hop,” explains older sibling Malice, ahead of the release of Clipse’s third studio album ‘Till The Casket Drops’. “We couldn’t get near mixtapes that were being made in New York and if they did decide to put us on, they would stick us at the end where no one was checking.

We were treated like the runts of the litter and not allowed at the food. So we decided to stay amongst ourselves. It was just us and The Neptunes.” Breaking through with their first full-fat album ‘Lord Willin’’ in 2001, Clipse were dismissed by many as little more than a vanity project for The Neptunes – looking to give raw street textures to the dystopian rattles and herky-jerk synths that defined their work. However, even a cursory listen to the likes of ‘Grindin’’’ or ‘Cot Damn’ revealed Clipse to be adroit, self-aware and morally ambiguous narrators. Following a frustrating five-year hiatus precipitated by label politics, Clipse finally returned in 2006 with ‘Hell Hath No Fury’, a genuine contender for album of the decade and the point where Pusha T. and Malice began to distort expectations.

Flitting between thoughtful reflection and choleric brutality, ‘Hell Hath No Fury’ found itself labelled coke-rap due to its narcotic predilection – yet whereas other rappers would be happy to become pigeonholed therein, Clipse challenged both themselves and their audience throughout. Artistic integrity intact. Categorisation and promotion decidedly more difficult. So, how would Clipse describe themselves? “It’s definitely thinking man’s hip-hop. We’re not going to leave you at a dead end. It’s gonna take you somewhere, it’s gonna paint a picture; it’s gonna have a beginning, middle and an end. Other cats that I hear on the radio are only concerned with a feel-good thing and say whatever you want as long as you can swagger it out.

But that’s not us.” This seems to conflict with the coke-rap tag you had a few years back. How did that sit with you? “Honestly? I was pissed by it. Our canvas may have been coke but we tried to explain what could happen in this situation, what does happen in that situation. It was never coke rap – that was just a starting point, but nothing more.” Closing with a discussion about new album ‘Till The Casket Drops’ and their decision to cast a production net beyond The Neptunes (“The only real thing we lost was the luxury of having Pharrell call and say, ‘Come pick up this beat’), Clipse are that rare thing within hip-hop; braggadocio yet conscientious, an unlikely dichotomy amongst conformists. “And that’s why people don’t know who we are yet,” jokes Malice. But that could all change with the new record? “Yeah, or we could always be the people who did the song with Justin Timberlake. I enjoy it either way!”