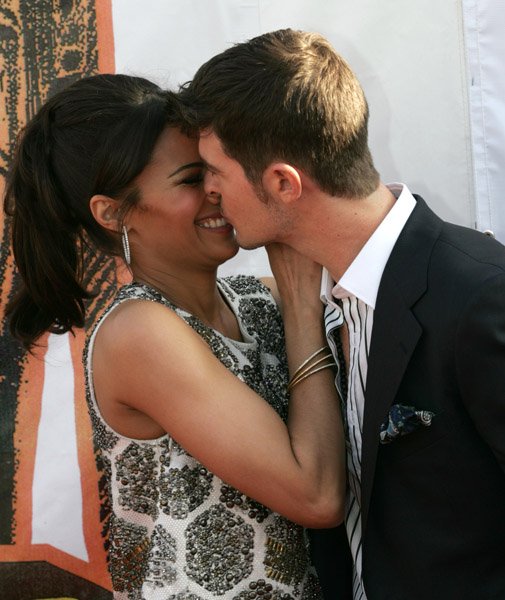 Paula Patton says she used to keep her husband a secret from her friends – because he is white. The actress, who played Gabourey Sidibe‘s teacher in the movie Precious, is married to R’n’B singer Robin Thicke. But Patton – who is half-white herself – says she was too scared to introduce her white boyfriend to her black school friends. ‘When I was in high school I found myself totally enamoured [with] this guy,’ the 34-year-old says. ‘But I didn’t want all my high school friends to know that I’d fallen for a white boy. ‘I didn’t want to be judged by that. So I hid him. I did.’ In fact Patton, now pregnant with the couple’s first baby, missed her high school prom because she didn’t want to invite him. ‘That’s the sad part.

I missed it because I was afraid,’ she says. Patton and Thicke have been together since she was 15 and he was 14 and they met at a teen dance. Now Patton says she has no qualms about telling the world who her husband is – whatever his race. ‘I didn’t choose him because of his colour. I chose him because of his heart and his soul and he makes me laugh. He’s one of the most special human beings I know,’ she says. And when asked about what attracted him to his wife, Thicke, 32, says: ‘It was that big smile. She just had the biggest, brightest smile I’d ever seen.’