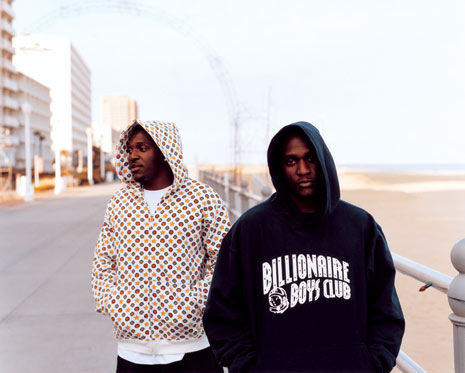 Clipse as The Burrow Gang

Reuben “Rube” Burrow and his brother, Jim, turned to crime after the crops on their farm went bad. Though their first train robbery in December 1886 didn’t turn a massive profit, they formed a gang and eventually became the most successful train robbers in the Old West since Jesse James and his crew. Similarly hip-hop’s brothers, Gene “Malice” Thornton and Terrence “Pusha T” Thornton, better known as the Clipse took to a life of rhyme as an alternative to pushing banned product in the streets. The cocaine rap pros made a big splash with their first release Lord Willin’ in 2002, then in 2006 formed The Re-Up Gang record label for the release of their critically acclaimed sophomore album Hell Hath No Fury.