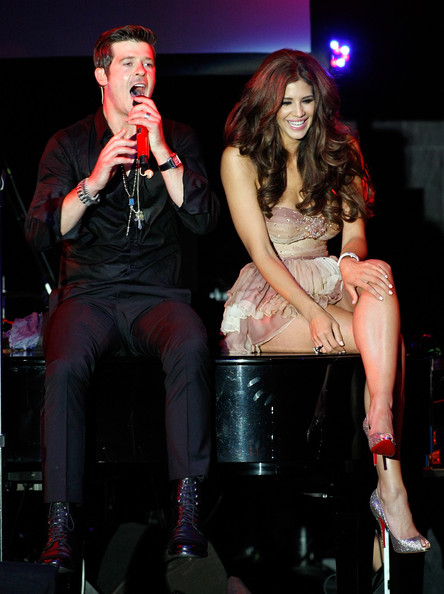 Playboy founder and legend Hugh Hefner last night officially unveiled the 2010 Playboy Playmate of the Year, stunning 25-year-old Texan Hope Dworaczyk (also the April 2009 Playmate of the Month), in a celebration at Rain in the Palms that also included music and dance performances, red carpet arrivals, videos and previous PMOYs. Three-time Grammy winner Robin Thicke, who watched The White Tie Affair from a balcony far above Rain before taking the stage, performed a set that included a dedication of “Lost Without You” to Dworaczyk, who was perched atop a black piano for much of the performance. Two things about Thicke: He sweats a lot (he doesn’t seem to favor breathable fabrics), and his hips don’t lie. Robin Thicke = soulful sex, if that makes sense.