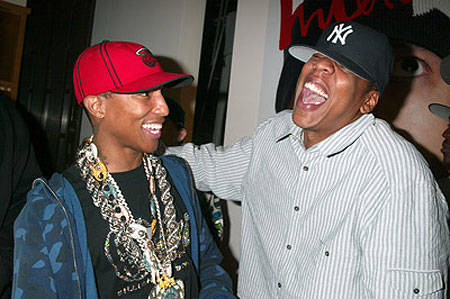 During a press conference in December to announce his pair of Carnegie Hall shows Jay-Z told MTV News that there’s a chance we would see two new projects from him in 2012. In addition to a new solo album, Jay also mentioned that a second Throne album could arrive, and when we caught up with Pharrell earlier this month, we probed a bit more. “We’re working on something, it’s crazy,” Skateboard P said after a long pause. The Neptunes producer contributed “Gotta Have It” to last year’s Watch the Throne album and also laid the beat for Jay’s Blue Ivy dedication, “Glory.”

Through the years, Jigga has logged a ton of time with The Neptunes captain, starting with 2000’s “I Just Wanna Love U (Give It 2 Me).” Since then, Hov and P have hooked up on a number of notable tracks, including “Excuse Me Miss” from 2002’s The Blueprint 2 LP and The Neptunes‘ 2003 hit “Frontin‘.” “We — I say ‘we’ because I’m in Throne mode — we’re in a great place creatively,” Jay said of his and Kanye West’s chemistry. “You might see a Jay, then Kanye and a Throne album next year.

You know, we’re really in a great place creatively. We really found our zone.” With things still in the works, Pharrell is reluctant to let go of any info. Instead, he’d rather just let Jay speak on things when he is ready. “Well, you know, he’s very discreet about details and stuff,” P said. “I’m just a filmmaker, musically. I let everybody else play the roles.” By Rob Markman, thanks to Plaxxx.