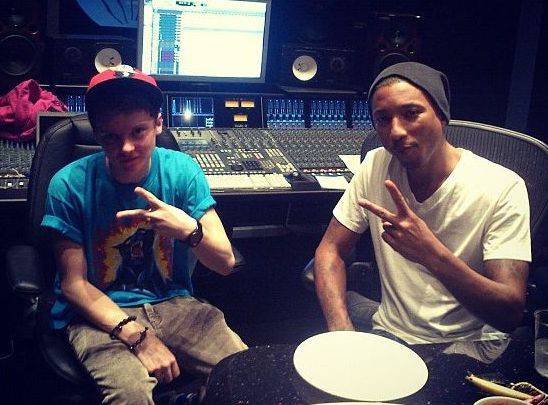 The ‘Can’t Say No‘ star says fans can expect to hear some exciting duets on his forthcoming record. Conor Maynard has teased fans by promising that there could be some “cool” collaborations coming up on his debut album. The ‘Can’t Say No‘ singer flew over to America earlier this month to work with The Neptunes producer Pharrell Williams on new material, and says it was a “crazy” experience that allowed him to meet several big artists. “That was incredible. I worked with Pharrell for about a week and in that time I think I met more famous people than I’ve ever seen in my life,” Conor revealed, during his exclusive webchat with CapitalFM.com. “I was lucky enough to meet Ludacris, Tyler the Creator, Lil Wayne.“

The 19 year-old singer-songwriter also worked alongside Ne-Yo in Los Angeles during his trip, although he couldn’t confirm whether the two had recorded together during his visit. “Obviously I went over to LA after to work with Ne-Yo. That was a crazy experience that was definitely very, very fun,” Conor recalled. “All I do know is, as of right now, there could be some cool collaborations for the album.” Brighton-born Conor announced his first ever UK tour earlier this week, with six dates across the country from April. Conor Maynard is due to launch his debut single ‘Can’t Say No‘ on 16th April.