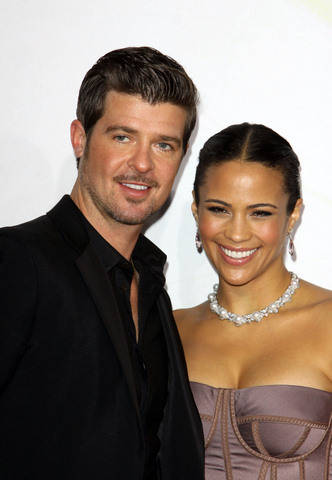 Robin Thicke is loved for so many reasons, one of them being that he’s an unashamedly proud husband of a beautiful wife. In an interview recently with TheYBF.com, he decided that Paula Patton should play the role of Whitney Houston in a much talked-about biopic.

“My wife [Paula Patton]! She reminds me of Whitney Houston. And when she was first starting, she was going out on auditions, they were like ‘ you know you remind me of that Halle Berry meets Whitney Houston.’ She got that a lot when she first started. So she’s been getting a lot of Twitter’s and Google’s about her playing Whitney Houston. But I think it’s way too soon. I think anybody that tries to do Whitney within the next year or two is a big mistake.”

He continued saying: “Everybody just wants to appreciate Whitney for the genius that she was, and let everything else come in a few years. Besides my remake of course. That wasn’t for attention, it was just out of appreciation. But everyone that’s gonna make a movie is gonna wanna make money off of it and it’s all gonna get jumbled and no one is gonna wanna tell the bad stuff because it’s too soon. And then you wont get the real story that what makes a human being a human being is their greatness and weakness. And Whitney was one of the greatest singers of all time, so it’s gonna be hard to tell that story honestly.” The interview goes on as the singer talks about his love for Patton and their dealings with interracial hatred along with his weed bust.