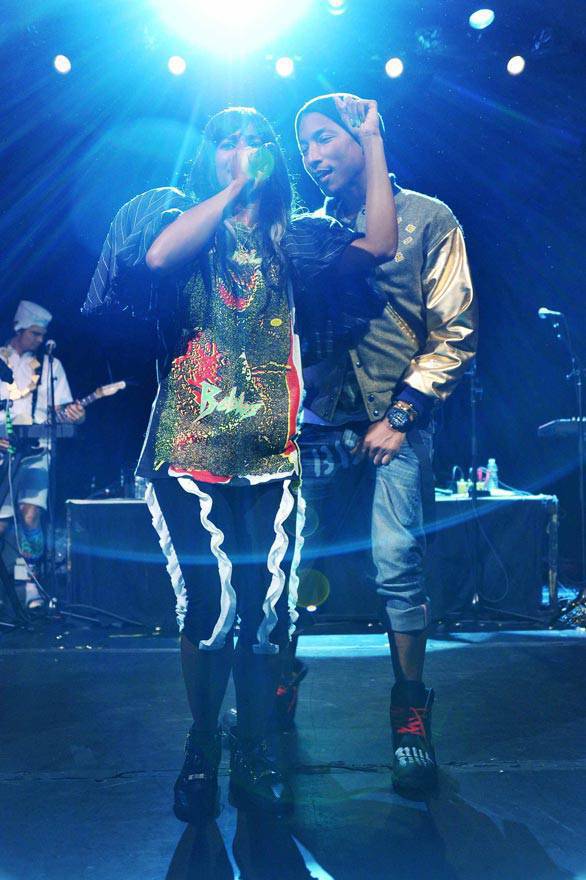 I’ve posted a while back about a possible new I Am Other Artist signee called Lydia Paek and Pharrell mentions the first time Lydia in a Interview, check it out below.

Mass Appeal snagged a few minutes with artist, entrepreneur and philanthropist Pharrell Williams minutes before the Virginia native blessed the stage at Irving Plaza last night as a special guest of Santigold. Santi was tapped by Samsung to headline their Samsung Mobile Present concert series. The concert was a celebration and promotion of the Korean electronics giant’s massively popular phablet (that’s phone and tablet) the Galaxy Note, which is so huge, you can barely grasp it with one hand. Santigold performed a set of songs from her first album Santogold and rocked out new songs from Master Of My Make-Believe, her follow-up.

We spoke to N*E*R*D leader and Billionaire Boys Club creative director Pharrell in a second-floor dressing room above the stage at Irving Plaza while Santi and her voluptuous dancers opened their set. Skateboard P proceeded to amp up the audience even more when Santi brought him out to perform The Lonely Island’s “After Party.” The party anthem was a nice nod to the Lonely Island’s frontman and Saturday Night Live digital short filmmaker, Andy Samberg, who was also in attendance. Thanks to Reidkid and nerd0016.

Mass Appeal: Can you talk about your musical-relationship with Santigold?
Pharrell: We collaborated on a couple of things before. She hopped on this B-side, a song called “Soldier” for N*E*R*D, and then we did something else together too, “My Drive Thru.”

Can you also talk a little about your #IAmOther campaign?
P: It’s just a legion of kids who are happy to be different; we celebrate our differences and our creativity; that’s all it is.

Speaking of differences, what are your thoughts about Barack Obama coming out in support of gay marriage? A lot of your fans are gay, young kids.
P: Right.

Music is a bridge that brings people together and the stuff you’re doing is bringing millions of people together, not just with music but with science and your work with the community. Now, when you were growing up in Virginia, did you feel like you were different from your peers? You were into skateboarding, you were making art [you were seeing sounds], you were also interested in music. There probably wasn’t that many people around you into the same things. Did you feel ostracized being different?
P: No, not really. I mean, being different you’re gonna encounter opinions on what people feel is appropriate, what people feel is inappropriate, like just on a basic level of agreement. Whether you like something or you don’t: to each his own.

What about when you’re traveling? What are some of the differences or hassles you’ve encountered when you’re traveling? You’ve spent time in Asia, in Tokyo, Hong Kong. [You even have a book with Rizzoli about your travels]. Have you ever been to India?
P: I’ve not been to India yet. I was meant to go a couple of years ago but then we had a change in plans and I just didn’t go.

Where’s she from?
The West Coast.

How would you describe her music?
You guys will see! She’s special!