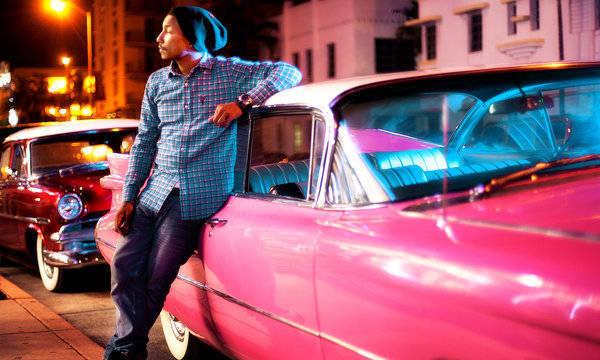 Pharrell Williams on motivation, his book and working with Miley Cyrus. By Tahajah Samuels. More than a music producer, singer-rapper, composer and designer, Pharrell Williams is an expressionist — a person fully immersed in the worlds of art and culture. His new coffee-table book, “Pharrell: Places and Spaces I’ve Been,” shares his insightful conversations with cultural influencers such as Jay-Z, Anna Wintour, Zaha Hadid, Buzz Aldrin and Kanye West, to name just a few. Williams recently spoke with CNN about his book, the people who have influenced him and his upcoming projects.

CNN: What motivated you to write “Pharrell: Places and Spaces I’ve Been”?
Pharrell Williams: The motive was to share with everyone, both the people and the moments that inspired me to continue to express myself. … I wanted to share with people … the way that they would talk and the things that they would say.

CNN: Speaking of the people who have inspired you and pulling from the book’s themes, discuss the conversation you had with artists like Jay-Z.
Williams: You know, the whole Jay-Z interview is interesting, but what’s more interesting is his perspective as it relates to the kind of work and the standard that he created in his music. … When you look at his perspective and his views on things and then you look at his work, you can sort of induce how he gets things done.

CNN: Outside of being influenced by a diverse group of artistic professionals, you’re an influencer yourself. Miley Cyrus has been in and out of your Miami studio. In Marie Claire, you were quoted saying you wanted to “free” the now grown-up singer. Were you able to do so?
Williams: Well, I didn’t free her. She freed herself. And that’s the only freedom that I could ever offer anyone — is the acknowledgment that you can set yourself free. … She’s allowing herself to just be who she wants to be and not feeling like she has to ration herself to a grid that is what everyone else deems as “the perfect American.” She doesn’t really want to be “the perfect American.” She just wants to be the perfect version of herself. And she encourages other girls to do the same thing.

CNN: What can we expect from the Miley-Pharrell collaborative record(s)?
Williams: We don’t like to do a lot of talking about what it’s gonna do or what it’s gonna be. It’s just — it’s good stuff man.

CNN: In the book, Kanye West talked about his state of musical creativity at a particular time. What are your thoughts on music’s progression?
Williams: I think music follows the trends of the collective conscious. I would urge someone when they read the Kanye one, again read it and look at his views … look at his values and see where he values things and then listen to his music and you can basically see what his mind is like. That’s what “Places and Spaces” was supposed to do — it was supposed to give people a glimpse into the minds of the people who inspired me, and when I got inspired, it was because I would look at the things that they would say and I would look at the things that they would do. And somewhere in between there, I got a feeling for who those people really were.

CNN: On your expansion as a musician to now a composer, you’ve produced the soundtrack for the 3-D animated film “Despicable Me” and scored the 2012 Academy Awards alongside Hans Zimmer. Will you be composing more?
Williams: Yes! The new ‘”Despicable Me 2″ is coming. It’s incredible. I got to keep up with it — what they’re doing visually; I have to keep up with it musically. … It’s very inspiring and the music that it’s inspired me to make is crazy; it’s like something I’ve never done before. I would say there are a couple of other things in that realm as well. I don’t like to (talk too much about it); I just like to blast it.

CNN: You talk a lot about your inspiration. What is currently influencing you?
Williams: (Pauses) Influencing me? Right now, musically I’m inspired by everyday people. Music is all of a sudden much more colorful. … The element of harmony is super important. … I suppose that’s why it feels so great. It’s just been interesting to see this new change in direction for me.

CNN: While we have yet to hear the new music you’ve been creating — early October you caused a Twitter frenzy among fans when you tweeted a photo of you, Frank Ocean and Jay-Z in the studio.
Williams: (Laughs) I love music man. That’s all I can say. I love music.

CNN: In your book, you talk about the places and spaces you’ve been. Where exactly are you going next Mr. Williams?
Williams: (My team and I are) only headed up. (Chuckles) Everything. Television, video games, products. We’re only headed up. It’s the only way we know.