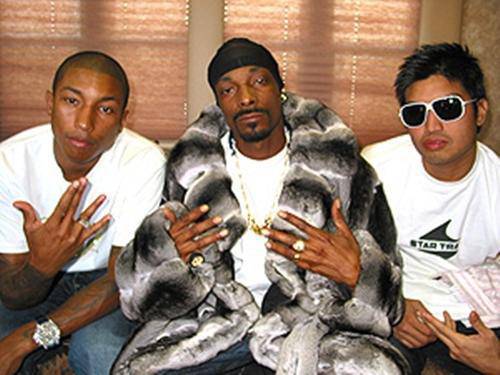 Snoop – formerly known as Snoop Dogg – told the US edition of GQ magazine: ‘When I worked with Pharrell, nobody knew what I was doing but me. I knew what he would do. Everybody laughed and said, ‘You working with him?’ And when’s the hit? BOOM, BOOM BOOM, BOOM BOOM! I know what I’m talking about.’ Snoop first collaborated with Pharrell and producing partner Chad Hugo in 2002 on his sixth studio album, ‘Paid Tha Cost To Be Da Bo$$’. The Neptunes were formed in 1992 but achieved breakthrough success in 1999, producing the single ‘Got Your Money‘ for Ol Dirty Bastard, although at that time they also already had ties to Snoop.

The 41-year-old musician – who previously stated he was ‘bored’ of rap and will release reggae album ‘Reincarnated’ later this year following a soul-searching visit to Jamaica – once famously referred to himself as ‘Bob Marley reincarnated’, and has received the blessing of the late singer’s family . He said: ‘We was all together in the dressing room, and I just was like, ‘Man, I gotta tell you something. Man, I’m fiddin’ to do an album and a movie, and Bob Marley reincarnated’. When I said that, they eyes lit up like they was fing happy! I thought they was gonna be like, ‘Nah, man, you can’t fk with our father’s st’. They was honoured I was doing it.’