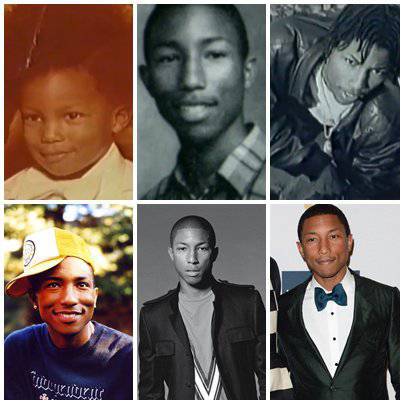 By Brandon Neasman. For most, turning 40 is probably a milestone worth dreading. It’s another birthday to remind you that you’re getting old, unlike becoming legal at 18 or buying out the bar on your 21st. Turning 40 is probably a drag, but luckily, for Pharrell Williams, he isn’t most people. Williams’ work in the hip-hop genre is well documented. From his contribution to the immensely rich catalog of The Neptunes to his guest features on tracks with everyone from Jay-Z to A$AP Rocky, Skateboard P has pretty much done it all in the realm of rap.

But at 40, the Virginia Beach native has accomplished much more than your typical beatmaker. To call him a man of many hats would be an understatement. When he’s not producing top-notch beats for A-list musicians or rubbing elbows with Oprah Winfrey and fashion icon Anna Wintour, Williams dabbles in various arenas, proving that he’s an entrepreneur, innovator, and much more than a producer. Williams established himself in the fashion world in the mid ‘00s with his Billionaire Boys Club clothing line and b sneaker brand, both in collaboration with acclaimed Japanese fashion designer Nigo. Additionally, he played an essential role in introducing A Bathing Ape (Which celebrates its 20th anniversary this year) to North American audiences and in 2012, launched a new clothing collection, Bee Line, in collaboration with menswear designer Mark McNairy.

On top of being a curator in the apparel industry, Williams has proven to be a jack of all trades by composing soundtracks for animated films (2010’s “Despicable Me”), scoring the 84th Annual Academy Awards in 2012, producing bicycles for Brooklyn Machine Works, becoming the creative director of Karmaloop TV, becoming a published author (Places and Spaces I’ve Been) as well as creating and starting his own multipurpose, creative media outlet with I Am Other. And while the super producer-turned-business man has a slew of successful ventures that he’s recognized for, ultimately, he will always be remembered for his impact on the music industry.

Though most people generally think of him strictly as half of the hip-hop production duo The Neptunes, Williams’ musical talent transcends the rap genre. Throughout his career, he’s left his mark by not only creating his own music, as both a solo artist and member of N*E*R*D, but also by cultivating and influencing other artists as well. Before Justin Timberlake and Timbaland wowed fans with their chemistry on FutureSex/LoveSounds, and then again with 2013’s The 20/20 Experience, it was Williams, along with partner Chad Hugo, who helped usher in JT’s solo career by producing the majority of his multi-platinum debut album, Justified.

And while Pusha T. is currently experiencing solo success under the wing of Kanye West, it was Williams who introduced Pusha and brother Malice to the world as The Clipse. Over his 20-plus-year career, Williams has, directly or indirectly, influenced artists across the hip-hop genre by simply being a trailblazer, inside and outside of the studio. You can see his influence in current artists like Tyler, The Creator, whose latest album, Wolf, consists of songs that drip with the vintage Neptunes sound. Other artists like Big Sean and Kid Cudi can’t sing per se, but employ Williams’ technique of harmonizing on tracks in just the right tone where it actually sounds appealing.

And long before Lil’ Wayne picked up a skateboard or knew what an ollie was, it was Williams who was pushing the skateboard culture into hip-hop. Producing hip-hop records is something that Williams is great at. In 40 years, people will still remember the first time they heard Nelly’s “Hot In Herre” in the club, or the sound high school lockers made while recreating the “Grindin’” beat with their knuckles and the side of their fists. But he’ll be remembered for more than that. The fashion trends, business ventures, his artistic influence on the music industry and pop culture as a whole are all things worth revering.

If Mr. Williams has accomplished all of this in 40 years, imagine what he’ll do in the next 40. Brandon Neasman is a freelance writer who has penned articles for both national and regional publications, including usweekly.com and the Hard Rock Hotel’s Las Vegas magazine. A graduate from Florida A&M University, Brandon is an editor at mostlyjunkfood.com and a graphic designer for the Gannett Company, Inc.