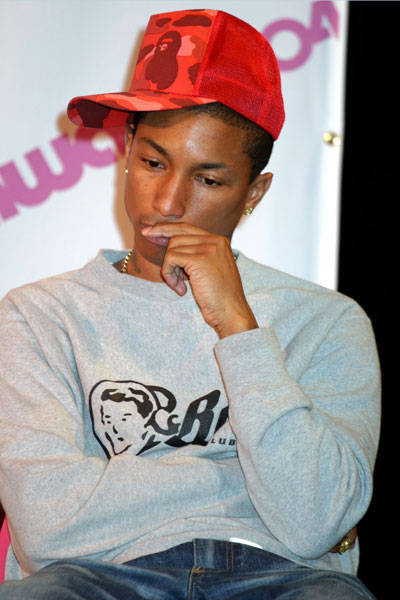 By Andrew Unterberger. Looking at the Top 20 of the current Hot 100 chart, a familiar name appears twice: Pharrell Williams. For fans of early ’00s pop music, this is hardly an unusual sight — time was, Williams was about as consistent of a presence as there was on the charts, both as a behind-the-scenes producer and as a go-to hook man and featured artist on smashes by Nelly, Snoop Dogg, Justin Timberlake, Clipse and countless others. But as the golden age of the baby-faced rapper/singer and his production team The Neptunes (with longtime partner Chad Hugo) faded with the rise of rawer hip-hop sub-genres like crunk and snap, and as Williams and Hugo moved in different directions creatively (the former releasing his first solo album in 2006, and both continuing work in the experimental alt-rap group N*E*R*D), the hits dried up.

As of early 2013, Pharrell had not worked on a single that cracked the Top 40 of the Hot 100 — either solo or as part of The Neptunes — in over half a decade. Amazingly, his last hit came way back in late 2006 with Gwen Stefani’s No. 6-peaking “Wind It Up,” which Williams co-wrote and The Neptunes produced. However, that’s not to say that Pharrell had become dormant or static as an artist — far from it. Despite his quiet end to the ’00s, his first few years of the ’10s have actually represented one of the most artistically fruitful periods of his 20-plus-year career in popular music. Since 2010, Williams has diversified his musical portfolio while affirming that he was still one of the best at doing what he’d always done — crafting catchy, funky, and instantly memorable hip-hop beats.

It was only a matter of time until one of his songs re-introduced him to the Top 40… and as if to over-compensate for lost time, two of them, the Daft Punk disco throwback collaboration “Get Lucky” and the clang-and-shuffle of Robin Thicke’s “Blurred Lines,” arrived almost simultaneously this year. Both of those songs are great, and deserved hits, but they’re just the latest chapter in the uniformly impressive decade that Williams has had leading up to them. If you’ve been sleeping on Pharrell during his time spent out of the spotlight, here’s some of the better songs he’s worked on in the meantime, many of which pointed the way to his inevitable comeback — and a number of which were comeback-worthy on their own.

In 2013, just about everyone in hip-hop seemed to be jumping on the EDM bandwagon, but Williams was way ahead of the curve, providing guest vocals for the breakout single from dance supergroup Swedish House Mafia back in 2010. The song was already banger enough as an instrumental to catch Williams‘ attention, but it was his tacked-on vocal, with its unusual cadence and exceedingly odd phrasing (“I wanna know your name / just killed me, could you at least do that?”) that really made it stick with listeners, and helped to send the DJ trio on their way to superstardom.

Though obviously the most successful to date, “Get Lucky” was not the first collaboration between Pharrell and Daft Punk: The Neptunes first remixed Daft Punk’s “Harder, Better, Faster, Stronger” about a decade earlier, and DP returned the favor by co-writing and producing the second single off N*E*R*D’s “Nothing” album in 2010, “Hypnotize U.” With the song’s restrained rhythms and repetitive hook, it’s no surprise that “Hypnotize” stiffed commercially, but it’s a transfixing groove and a fascinating-in-retrospect early mind-meld between the two artists.

Like many hip-hop impresarios of his stature, Pharrell has had a series of proteges over the years, including the young Compton rapper Buddy, who P helped discover and whose debut single “Awesome Awesome” he produced. Neither the song nor rapper took off commercially, but “Awesome Awesome” demonstrated Pharrell’s impressive adaptability as a producer, sounding more in line with the grand drama and bombast of a Lex Luger beat, but maintaining a litheness (particularly with its pogoing, constantly-repeated title hook) to keep it distinct.

As half of The Neptunes and Clipse duos responsible for era-defining smashes like “Grindin‘” and “When The Last Time,” Pharrell and Pusha T. have had a long history of bringing out the best in one another. But on “Trouble,” it’s a newer creative partner who steals the show, with Odd Future mouthpiece Tyler, The Creator–long on record as music’s biggest Pharrell booster — riding the understated, “Top Billin‘”-quoting beat with the kind of casual dominance it demands. It makes you wonder whether the hero and student can get together for a longer-form collaboration.

On an album starring two of hip-hop’s biggest artists and personalities, the presence of Williams on “Watch The Throne” was unsurprisingly lost in the shuffle. However, he got a co-writing (and The Neptunes a co-producing) credit on one of the album’s most popular tracks, the low-key and jarringly brief single “Gotta Have It.” The song’s Eastern flute hook has echoes of Neptunes hits past like N.O.R.E.’s “Nothin’,” and along with the chopped-up James Brown samples — far closer to the trademark of co-producer West — showed that Williams was able to blend his own style seamlessly with that of one of music’s most commanding presences.

Even Pharrell’s most devoted followers had to be caught a little off-guard by the writer/producer’s work on “American Idol” alum Adam Lambert’s “Trespassing” album, churning out both the barnstorming, “Another One Bites The Dust“-esque glam disco of the album’s title track, and the strobe-light throwdown of “Kickin’ In,” arguably the album’s finest track. Lambert gave Williams his finest pop muse since Justin Timberlake (“Rock Your Body,” “Senorita“) back in ‘03, and P responded with two of his most creative, intoxicating and boundary-stretching tracks of recent years, both of which would have been mega-hits in a fairer pop universe. Clearly, Pharrell and disco were meant to have further success together.

Maybe the Pharrell track of the ’10s that most points the way to the old-fashioned soul/funk of “Blurred Lines” was Usher’s “Looking 4 Myself” album track “Twisted,” with its dissected Motown groove and showman’s sense of audience engagament (“All the girls! Make sure your skirt ain’t too tight!”). It’s a little on-the-nose at points and not quite funky enough at others, but it’s a worthy first draft of the “Lines” blueprint, fun and classy and with energy to spare.

Perhaps the song from Pharrell’s bountiful 2012 that most turned heads was Frank Ocean’s “Sweet Life,” a soul number that felt like a total about-face for the writer/producer. Not that the genre was anything new to Williams, but we’d rarely heard a number of his that was quite this organic-sounding, maintaining a loose vibe that contrasted starkly to the locked-in rhythms and precision-timed hooks we’d become accustomed to. The song’s sunny horns, gentle keys and expansive groove helped make it a fan favorite on Ocean’s debut mainstream release.

More of the Eastern-tinged instrumentation of “Gotta Have It,” but this time paired with a lurking, sinister bass line to create a queasy feel for the opening number to the second act of Lamar’s hip-hop masterwork, “good kid, m.A.A.d city.” Few would cite the song, which mostly serves as a transitional number, as an album highlight, but it demonstrated that Williams was re-emerging as a go-to producer for the highest-profile hip-hop releases — in 2012 alone, Pharrell worked not only on “good kid” and “Channel Orange,” two of the year’s most acclaimed albums, but also Rick Ross‘ “God Forgives, I Don’t,” Tyga’s “Careless World,” T.I.’s “Trouble Man” and Wiz Khalifa’s “O.N.I.F.C.”

In 2003, news of a Destiny’s Child and Pharrell collaboration would be enough to shut down the pop world for weeks at least, and even in 2013, their collaboration was feverishly anticipated. However, the resulting track was not the radio-ready, undeniable smash that many anticipated — instead, it was a moody, meditative R&B/dance hybrid more in the mold of a PM Dawn or Shai track from the early ’90s. “Nuclear” was far from a commercial success, but it was actually quite a lovely song, intimate and engaging in a way different than any other Destiny’s Child song had been before, showing just how far outside the box both artists were capable of operating.

The spreading diversity, explosive creativity and steadily increasing profile of Williams‘ productions and collaborations over the last three-plus years — only a fraction of which are even listed here — were simply bound to bubble over into his first mainstream hit in far too long. Taken as a whole, his recent discography demonstrated that the writer/producer was far from a relic of the early ’00s, and was actually doing some of the most inspired, accessible and challenging work of his career.

Though none were hits on their own — few were even released as singles — each track paved the way for Pharrell’s return to prominence, where artists like Daft Punk and Robin Thicke can now trust him with guiding or playing a key supporting role in their new albums’ lead singles. “Get Lucky” and “Blurred Lines” helped make us realize just how much we missed him during the years he was mostly absent from the mainstream pop landscape. If, over the next few months, the sound of Williams’ unmistakable falsetto and The Neptunes‘ trademark rhythmic shuffle once again become unavoidable on Top 40 radio, it won’t come a summer too soon.