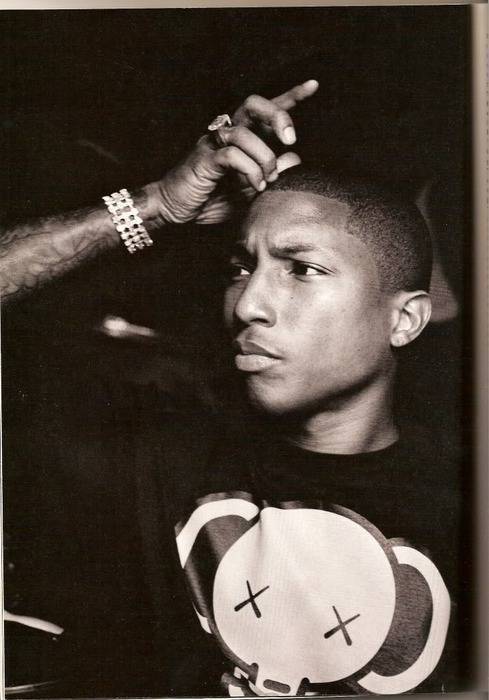 By Lynn Barker. Pharrell Williams, with his partner Chad Hugo, as The Neptunes, set soul, hip hop and R&B music on a new track over ten years ago. The singer/songwriter, record producer has expanded his expertise since his last album and is noted now for producing and co-writing music for Miley Cyrus, Adam Lambert, Game and many more artists as well as contributing music for the Academy Awards and late nite queen Chelsea Lately.

In 2010, Pharrell composed the soundtrack for the movie Despicable Me and now he has written three new original songs, included alongside composer Heitor Pereira’s score, to the sequel, Despicable Me 2; “Happy“, “Scream” featuring Cee-Lo Green and “Just A Cloud Away“. Also on the soundtrack are “Despicable Me” and “Fun, Fun, Fun” from the first movie. We are sitting down with Pharrell to find out his inspiration for his latest music, which is his fave character from the “Despicable” movies and his goals every time he writes a song.

Kidzworld: Who is your favorite character in the film?
Pharrell: I like Gru’s humor. I love that dry humor. The funniest things he says are under his breath. That’s so genius and so relatable.

Kidzworld: This was your second time contributing music to Despicable Me. Talk about your process of writing. I loved “Happy”. How did that come about and what inspired you for that?
Pharrell: The process is usually the same. They do one of two things; they tell you “We’ve just written this new scene and we need x,y and z” or sometimes they’ll already have temp music where the tempo really works, the feeling of the song works but the song is overplayed. Or, a lot of it is right but they want something new and fresh. The writers and the director chose a different overarching theme for this one which was a much more happy place. I feel like they were smart. I think people are becoming desensitized to the tragedies and travesties (in the world) at this point. What about the happier side of things? We needed to go to a lighter place. I was just so happy, pun intended, to express that. I was so lucky to be a sticker on that rocket ship.

Kidzworld: Which character or situation was the most fun for you to create music for this time around?
Pharrell: Again it was the overarching theme. For the first film, the songs came from things characters would say or things they would do. This time I chose a different approach (and went with the overall upbeat theme).

Kidzworld: You have your hand in a lot of trades so how do you decide what to do and why did you pick Despicable Me to be involved in?
Pharrell: I mainly go with a feeling. I have a super incredibly comprehensive team that often sees things before I do and they’re like “No, you’re buggin’. You need to do this”. But this is not something they needed to twist my arm to do. It’s animation.

Kidzworld: So you’re a big fan of animation?
Pharrell: As a child growing up in Virginia Beach, Virginia, I was always obsessed with cartoons. When my aunt used to watch me it was a serious tug of war. She wanted to watch “General Hospital” and I wanted to watch “The Flintstones”. It was a thing. So now being a grown up and being able to afford my own TV and my satellite service, Boomerang (classic kids’ TV shows) is on all the time. As far as working with these guys, it’s animation. Who turns down these guys? It’s not afforded to many people. I know that I’m blessed and super fortunate so I like to repay it with diligence and research and just trying to find things that are so ‘sticky’, but also feeling good. There is a stickiness that pisses you off too. Like those songs that are annoying but you can’t get them out.

Kidzworld: Are you really enjoying writing music for films?
Pharrell: I still consider myself a novice. Filmmaking and scoring is a really comprehensive job that takes a lot of years and experience to get to an expertise level. I’m far from that but I got to learn so much on the job, working with Heitor Pereira (Score by), and Chris (Renauld, director) and his super-crazy team. I got to learn that there are many different routes to get to a destination. I concentrated on lifting people up emotionally.

Kidzworld: When you are writing songs and getting notes like “this is the type of music that we want. Go!”, has that limited your creativity?
Pharrell: When I’m given directives, I’m learning on the job but I’m also being pushed into a different place. It’s like being in high school again. You have electives and then different courses that are requirements that you may not be interested in but they’re making you do it.. like Home Ec. What? But then you grow up and realize that you now know how to make chocolate milk (laughter). But it’s kind of the same thing. You have requirements. When they are giving me directives to go into places I can’t imagine ever going into, I’m learning. It’s a new experience.

Kidzworld: How much of your musical past influences this kind of music and how much with this music influence your future endeavors?
Pharrell: I supposed that life experiences are where I culled most of my music from. Part of it is reaching into oblivion, things that don’t exist like what the writers did when they were creating the story for Despicable Me. What is a minion? What does that look like? They were reaching into oblivion. Most of my work is colored by my experiences.

Kidzworld: The Neptunes (Pharrell with partner Chad Hugo) sound reduced hip hop to its purest form. How much do you push yourself to go beyond that? Do you think about going in a different direction?
Pharrell: Someone asked me what inspires me and I say “That which is missing” because I don’t want to copy everything that’s already happening. I feel like when you copy you sort of blend in and when you blend in, you get lost. I try to make music that is super colorful and something you’ve never heard before. So, when you hear the whole album it’s a good feeling. Musically, that’s what I aspire to do whenever making an album.

Kidzworld: Is it easy to meld humor into music? Is it easy to have your music be reflective of funny things that are happening?
Pharrell: I wish I could just sit here and say “Oh yeah. It’s easy” but it’s so hard because so much of what we do doesn’t really have humor. Even when videos are festive you’re having fun but a different kind of fun. It’s not really humorous. The visual is usually when that comes into play. But, putting humor into music was very much a challenge for me because I’d never done that before. So, again, working on this film is a learning experience. Despicable Me 2 is in theaters July 3rd!