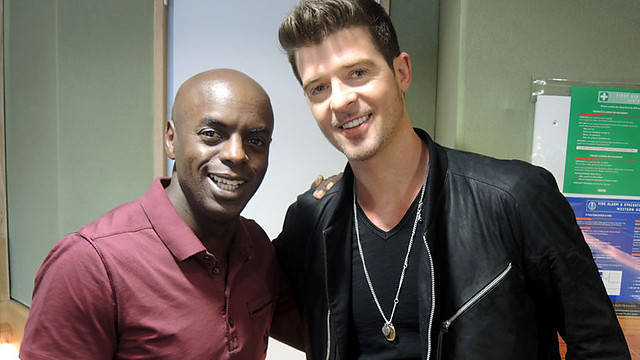 Trevor Nelson is joined by man-of-the-moment, Robin Thicke. Having recently enjoyed four weeks at Number One in the UK with ‘Blurred Lines‘ featuring Pharrell, he drops by the studio to co-host the show with Trevor and plays some of his all-time favourite records. The R&B singer/songwriter is also known for penning tracks for the likes of Mary J. Blige, Christina Aguilera and Usher, and has toured as the opening act for everyone from Alicia Keys to Beyoncé.

Robin joins Trevor as his sixth studio album – also named ‘Blurred Lines‘ – is released this week. He’ll be sharing the stories behind his song selection, how they have shaped and influenced his career, as well as talking about THAT video. Plus Robin is the latest celebrity inductee into Trevor’s ‘Vinyl Riches‘ Hall Of Fame, as he reveals his favourite ever record on vinyl.