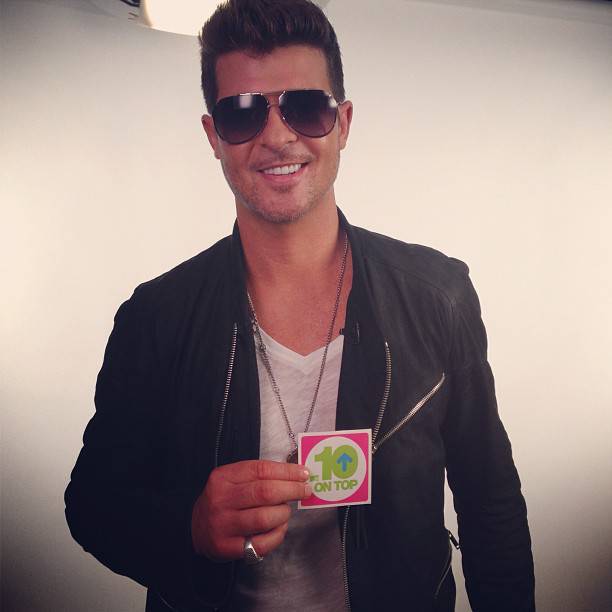 By PJ. According to Robin Thicke, his song “Blurred Lines” is such a hit that White folks are trying to “claim” him again. Thicke has released a few hits in the past including “When I Get You Alone” and “Lost Without You,” but “Blurred Lines” is his biggest single to date. When talking with the “The Breakfast Club,” Robin teased that the best way to measure his success is the type of fans he’s pulled in. “The biggest thing I think is [the success] internationally. I never had any love internationally. Being #1 in like 80 countries,” Robin said. “I think the biggest thing in America is that now White people finally got on it. White people are trying to claim me.”

But not everyone has been a fan of the song, some even calling the lyrics offensive and “rapey.” But Robin stands behind the song, claiming that it’s supposed to be a fun record to get people on the dance floor. “Pharrell and I would have never gone in the studio to make a song that’s derogatory,” Robin told the crew. “We’re saying ‘That man is not your maker’ and that a woman is as powerful as a man at all times. And they don’t need him to define her.”

After such a huge success with a single, some artists may be a little scared about doing a followup … hoping to capture the same reaction, if not bigger. But Thicke, who’s shooting the video for “Give It To You” this weekend, feels releasing a new single to promote the album is a natural step. “If I was, like, 16 and this was my first, you could get really scared. You could get full of yourself,” Robin explained. “After 20 years of making music, to have this kind of success. I feel like the luckiest guy in the world. I got the woman of my dreams. I have a healthy baby. This is just the best thing that could have every happened to me.”