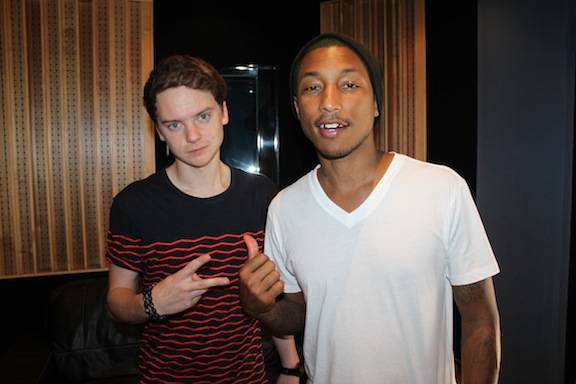 ‘I ate something funny that morning’. That’s what they all say. What with being a massive popstar with the type of snakehips that could melt an ovary with a single thrust, you might’ve assumed Conor Maynard was house trained enough not to go to the toilet in public. It might not be a great idea to let him loose on your mum’s best cream carpets just yet though as last time he hung out with Pharrell Williams he apparently ended up nearly pooing himself.

Good old Conor might’ve worked with all sorts of ridiculously fancy artists, but it’s only Pharrell that’s made him want to poo himself all over the floor. “I was ill one day, I wasn’t very well,” he admitted to Dave Berry and Lisa Snowdon on the Capital Breakfast Show, who’ve been broadcasting from Las Vegas this week. “I had a very upset stomach and I didn’t know what was going to happen. I didn’t pee myself in front of him…”

But while he might not have had a wee on Pharrell’s designer shoes, that doesn’t mean he didn’t almost leave him another, erm, gift. “I was ill! I ate something funny that morning,” Conor said, defending his honour. “God I didn’t know what to do. It was tough times.” It sounds more like runny times to us, but there you go.