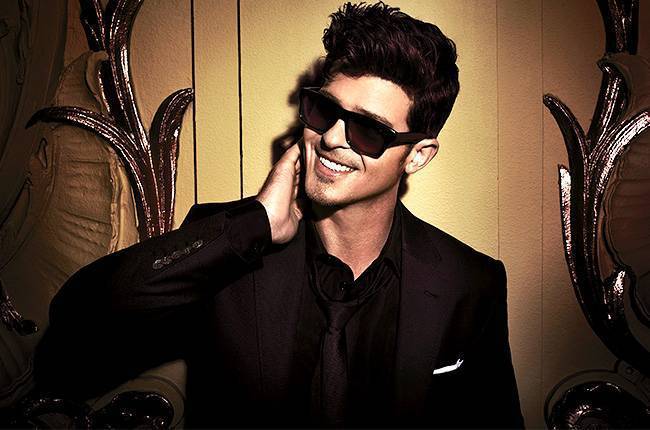 By Gary Trust. Having led the weekly Billboard Hot 100 for 12 weeks beginning in June, the track is the first summer season No. 1 by a lead solo male since 2004 Ending the (lack of) suspense, Robin Thicke’s “Blurred Lines” (featuring T.I. and Pharrell) officially clinches the top spot on Billboard’s 2013 Songs of the Summer chart. Billboard’s annual Songs of the Summer running tally tracks the most popular songs based on cumulative performance on the weekly Hot 100 chart from Memorial Day through Labor Day.

“Lines” took hold of the top rank on the Billboard Hot 100 the week of June 22 for its first of 12 frames at No. 1. (It cedes the summit to Katy Perry’s “Roar” this week.) It ties two other songs for the most weeks tallied at No. 1 on the Hot 100 encompassing charts covering Memorial Day through Labor Day: Mariah Carey’s “We Belong Together,” the top summer song of 2005, which collected 12 of its 14 total weeks on top in that span, and Brandy & Monica’s “The Boy Is Mine,” which notched 12 of its 13 weeks at No. 1 in the Songs of the Summer chart’s tracking period in 1998.

“Lines” has dominated multiple charts over the summer. In addition to its Hot 100 reign, it set the record for the highest weekly audience (228.9 million, according to Nielsen BDS) in the 23-year history of Billboard’s Radio Songs chart, passing Carey’s “Belong” (212.2 million). It leads the list for a ninth frame this week. The song also scored the Hot 100’s top Airplay Gainer award for a record 10 weeks.

Even as the heat of summer fades, “Lines” continues to top a host of surveys. It rules R&B Songs for a 16th week, Hot R&B/Hip-Hop Songs (for a 13th), Rhythmic (10th), Pop Songs (ninth), Adult R&B (fifth) and Adult Pop Songs (fourth). It’s sold 5.4 million downloads to date, according to Nielsen SoundScan. “Lines” heralds a return for solo males to the Song of the Summer summit. No track by a lead male soloist had claimed the honor since Usher’s “Confessions Part II” was the top summer song of 2004.

In between, six lead solo women and two duo/groups had emerged victorious. Last year, Carly Rae Jepsen finished first with her pop culture-conquering “Call Me Maybe.” Of course, “Blurred Lines” was far from the only song serving as a summer 2013 musical souvenir. Imagine Dragons‘ “Radioactive” ranks as the No. 2 song of the summer. The song spent the entire season in the Hot 100’s top 10 (peaking at No. 3) and racked a record 23 weeks atop Hot Rock Songs. It’s the highest-placing summer song by a rock band since Matchbox Twenty’s “Bent” was No. 1 for 2000.

As he reigns with Thicke on “Lines,” Pharrell also appears as a featured act on the No. 3 song of the summer, Daft Punk’s “Get Lucky.” The track peaked at No. 2 on the Hot 100 for five weeks and crowned Dance/Electronic Songs for 13 frames. Pharrell is the first act with two of a summer’s top three titles since 2009, when the Black Eyed Peas held the Nos. 1 and 2 spots with “I Gotta Feeling” and “Boom Boom Pow,” respectively. No male had so doubled up since Usher’s “Confessions Part II” was followed by “Burn” at No. 2 in 2004.

Notably, “Lines,” “Radioactive” and “Lucky” became the first top 10s on the weekly Hot 100 for Thicke, Imagine Dragons and Daft Punk, respectively. Since the start of the Songs of the Summer scorecard in 1985, never before had three artists’ first top 10s finished as a summer’s top three titles. Miley Cyrus‘ “We Can’t Stop” takes the No. 4 rank on the Songs of the Summer chart. It peaked at No. 2 on the Hot 100 for three weeks, tying her 2009 hit “Party In The U.S.A.” for her highest-charting single.