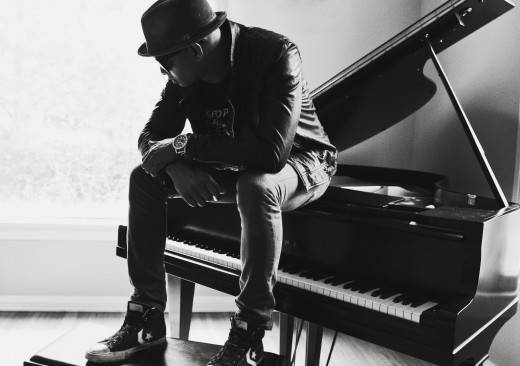 Cited as an early influence of former ghostwriter rapper Frank Ocean, Ethiopian-born American musician, philanthropist and technology creative, Kenna remains relatively unknown. A founder and producer of Summit On The Summit clean water initiative, the overly-active singer/songwriter has also climbed to the peak of Kilimanjaro an impressive three times for an MTV Documentary to raise money towards efforts in his country of birth.

The buzz in the U.S circulating Kenna is rife, with Pharrell Williams and Justin Timberlake tweeting their admiration. Kenna previously partnered with Timberlake to Re-Launch Myspace and the pair have since remained close friends.

If you had to describe your overall aesthetic in 5 words, what would they be?
The eye of the storm.

You seem like a very busy individual. How did you find a platform to the industry?
I am an Ethiopian-American immigrant who was born in a developing nation, raised in both the inner-city and the suburbs and because of those environments my influences are wide and varied, but the connection to all of them is my DNA and my spirits ability to recognise those influences in everything I make.

We hear both Pharell and Justin Timberlake are fans?
I met Pharell and Chad Hugo early on in my musical life in Virginia Beach. They became my mentors. I was lucky to meet them, and have like minded friends who knew I was contributing to the musical landscape in new ways and respected it.I am lucky to have a lot of peers who know and respect my work. It’s a blessing. Obviously Pharrell and Chad are at the top of the list. Justin [Timberlake] is one of my greatest allies, but I am also thankful to meet new artists that inspire me like Vic Mensa and draw from super artistic ones like Santigold.

What inspires you to write who has inspired your journey, thus far?
I get inspired by the void that people are afraid of. The unknown inspires me more than anything. Those things that exist in between. I feel as though I reach up into it and grab a handful of energy and translate that into words and meaningful thoughts.
I listened to everything from Michael Jackson to the Stones and Beatles. I loved U2 and The Clash.

Tell us a little bit more about the new EP’s?
‘Imitation is Suicide! Chapters 1-3′ are a sonic journey through my historic partnerships, my personal creations and my potential future collaborations with new allies. The first chapter is Chad Hugo and I. The second one is fully produced and created by me. And the last is produced and co-written by RJD2.
The one you will hear here is very much the heartbreak chapter. I had gone through a fairly troubled relationship with someone, and the result of it can be heard in these 3 tracks. The last of which is the focus track, and there is a realisation in the end, that it is better to have loved than to never have.

Is a full body of work soon to follow?
I am working on a full length to be out by May/June of next year. Totally new songs and working with some of my favourite people in the world. I’m looking forward to it. I’ve been working on it for a little while, and its all coming together.
Who would be your dream collaboration?
I can’t tell you mainly, because some of them will be on my next album!

What’s this about you climbing Kilimanjaro? All in a good cause, right?
Yes, I have climbed Kilimanjaro three times. The last couple of times I did it to help fight the Global Clean Water crisis. I built a project called Summit On The Summit which takes influencers and educators to the top of the world to represent the need for clean water around the world, and discuss solutions and actions that can be made to shift the world mindset towards the issue. It is the most meaningful thing I have ever been a part of, and the results have been epic. I am thankful to have such allies who would climb a mountain for mankind. Alumni like Melissa Arnot, Jessica Biel, Santigold, Mark Foster of Foster The People, Isabel Lucas, Emile Hirsch and Elizabeth Gore from the UN Foundation and Alexandra Cousteau.

Give us a brief description of your perfect oasis. your very own ‘Wonderland’?
Wonderland is where everyone in this world has clean water to spare and worthwhile music to blast out of big ass speakers that all combines into one infectious sonic that unites everyone in a greater good. Oh, and money, cash & hoes? I’m supposed to say that too, right?
– See more at: http://www.wonderlandmagazine.com/2013/10/new-noise-kenna/#sthash.QAqotppE.dpuf