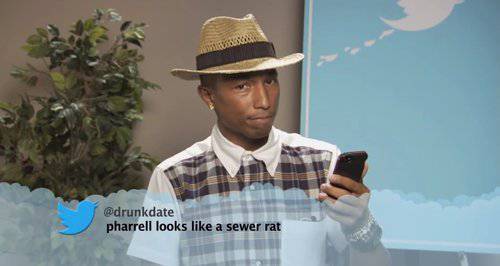 The stars take part in a special Twitter segment on Jimmy Kimmel’s chat show. Katy Perry and Pharrell Williams both star in a new video from the Jimmy Kimmel show where they read out offensive tweets about themselves. The ‘Firework‘ singer’s boyfriend John Mayer also takes part in the segment. Pharrell reads out a tweet which says he looks like “a sewer rat”. Lil Wayne, John Legend, Kid Rock and Ke$ha also take part in the hilarious clip. Watch the video of all the stars reading out ‘Mean Tweets‘ below.