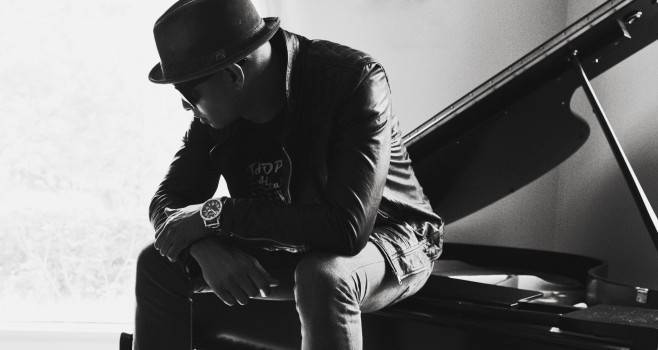 By Alexis Stephens. Ethiopian-American musician Kenna (real name: Kenna Zemedkun) has been in the game since 2001, when his song “Hell Bent” created a stir with its gorgeous nebulousness (Is it alternative? Is it urban? Is urban alternative a thing?). When asked about “Hell Bent” in our phone interview, Kenna commented, “That song was a way of me saying, ‘In the future, music will be unclassifiable. Call me Kennadamus.’”

“Hell Bent” is also cemented in my memory as one of the first songs that I illegally downloaded in the early days of Napster and then played on my laptop’s brand new music player, iTunes. Kenna’s entire career has been witness to the seismic shift in the way that music is consumed, with both the good and bad consequences. He’s still intimate with that shift, notably, as an artist-executive at the re-vamped, but still-challenged MySpace. As a musician, he’s rolled out a three-part EP, Land 2 Air Chronicles II: Imitation Is Suicide on Dim Mak Records. Each chapter is a different movement in a story about Kenna’s influences and an argument for artists to be more transparent about not living in a vacuum. There aren’t any “special snowflakes” — the matter that great ideas are made of is recycled fluff, just reconstituted in a new way.

The video for lead single “Relations” featuring Childish Gambino was just released and shows off Kenna’s peak nerd swagger. In our interview, we chatted about the inspiration of song, which led to an awkward exchange about how girls just don’t get nerd-talk because it’s too cerebral (he’s not kidding, he doesn’t know how to talk to women!), and the death of the genre.

“Relations” seems like an exploration of black nerd awkwardness…
That would be my life!

Can you tell me more about the song’s inspiration?
Delirium. That was the inspiration for the song. It was really late—2am and Chad [Hugo] just sent me something asking if I could do something on top of the bass line. I was really tired and my friend asked me to roll out with him. My friend is a killer; he slays the ladies. He’s a good-looking dude and I always end up in this weird position where I’m playing the wingman and I’m a straight-up nerd. I would say dork more than nerd, because you have to be really smart to be a nerd and I think I’m on the border. Anyway, he was coming to mind and I kept thinking about his game and how prolific he is and how I have no game. So the song came out of me being delirious and interacting with my imaginary female protagonist of my dream. I was also thinking about how disconnected we all are. The next thing that would happen, if I did get her number, would be texting. She wouldn’t get to know me. She’d just get to know my syntax. That’s boring. How do people actually get to know each other these days?

I’m obsessed with Chad. He’s a cipher to me. His role in The Neptunes, his avoidance of the limelight, etc. Can you tell me a bit about how your relationship has developed over the years?
Chad’s a savant. That’s really the best way to describe him. He’s connected to something way beyond understanding. He’s a guy that will play Rachmaninoff with no music in front of him and then turn around and play some kind of rumpshaker record [ed. note: like “Rump Shaker“?] or Michael Jackson right after. He’s prolific on so many levels. Our relationship has been symbiotic, because where I need help, he is an expert and where he needs help, I’m good at solving. I’m a melodicist and writer and I play instruments fairly well, but he’s much better and helps me round out my sonics and my production. He’s also a really unique character and sometimes it’s a little difficult to see where he’s going. You’d have to meet him and when you do, you’ll understand how he’s hard to describe.

Did having Childish Gambino on the song immediately come to mind?
It came up after. Donald and I are friends. I was thinking about who would be best on the record and he came to mind because he’s definitely really smart and cerebral and I could imagine him saying things that would go over people’s heads. I’ve definitely had the moments where I’m trying to talk to a girl and talk about things that girls don’t care about, I guess.

I mean, it depends.
Yeah, well I was just thinking about who might be a kindred spirit to the song and he came to mind. I told him, here’s the brief: “It’s an erotic dude who is completely disconnected and has no game. Can you do it?” And then he did it, but when he did it, he was way too smooth. He did a really tight verse, so I got it back and he was like “You don’t like it,” and I was like “No, I love it!” but in my head, he was too cool!
They say that there’s a nerd revolution and girls are into nerds, but I haven’t seen it yet. I just thought I’d give us an anthem. The fans that are watching, they either love it or hate it. The fans either get that it’s supposed to be awkward or look at it the way that people look at nerdy people and feel awkward around them.

Yeah it seems like the same divide between people who are like, “Oh, thanks for pointing that out or helping me think about that in a new way” and people who are like “No no, get this out of my face. I don’t want to be…”
“Challenged.” Yeah. Cool is dead. Nobody’s cool. Everyone’s a carbon copy. The all shop at the same stores. They all wear the same sunglasses. It’s like homogenized cool. They’re all offering the same stories. They all do the same things. What really matters is whether or not you are meaningful. Are you yourself in your own skin? Do you celebrate your failures and vulnerabilities and just exist? Are you being honest and real? Because that’s fucking cool. I don’t care about being sexy. What I care about is being honest. I know I’m kind of a dork. I know I care about clean water. I know I want to build wells in my home country. I want to help my peers do well with their music and their content. I’d rather be an ally. All of that star shit… I’d rather be a leader. Imitation is Suicide as an EP is me saying that ‘Yeah, I am. So?” I’m being really blatant about the massive, successful creators in the world who have influenced my work in some way, shape or form. I’m unique 100 percent and whatever I do is still going to be original even if I’m influenced by them.

You recently did an interview in Noisey, where you dropped a really intriguing phrase that I want to ask you to elaborate on: “There’s a new black in town”
I kind of look at it like this: If the Huxtables didn’t exist, I’m not sure that we’d have Obama. I think at the exact same time, you look at references in history and the black people who have created positions and built the world and have established us enough to be unclassifiable. To not even be black. We’re just people. When I say “there’s a new black in town” I just mean we’ve evolved enough where we don’t even need the reference to race. It just is. All of my music is literally in the genre “unclassifiable.” I’d like to coin the term right now that my genre is “unclassifiable” and I’m sure there are other artists that you know of that fit that genre. This is kinda what the new black is, unclassifiable.

For our publication, working with a lot of international artists, it has definitely become increasingly difficult to classify people. You almost get an aversion to doing so. But at the same time you want to give readers touch points, which help them to process …
Which limits what you guys are able to promote. It literally gets down to what you’re passionate about. If the work doesn’t have a meaning and impetus that greater than the genre that it fits within or what it is similar to, it’s not important. The cacophony of the egalitarian world we live in where you can make anything anywhere—I literally made songs on a plane the other day—it isn’t important because of who made it, it’s only important if it has meaning or value. Globalization has made it so that R&B is dead and so is genres. We have to look at the world… MTV Iggy has to say “We’re passionate about this. And the reason why is because the person is rad on 10 levels: they do this, they do this, and they make music like that and we fucking love it.”