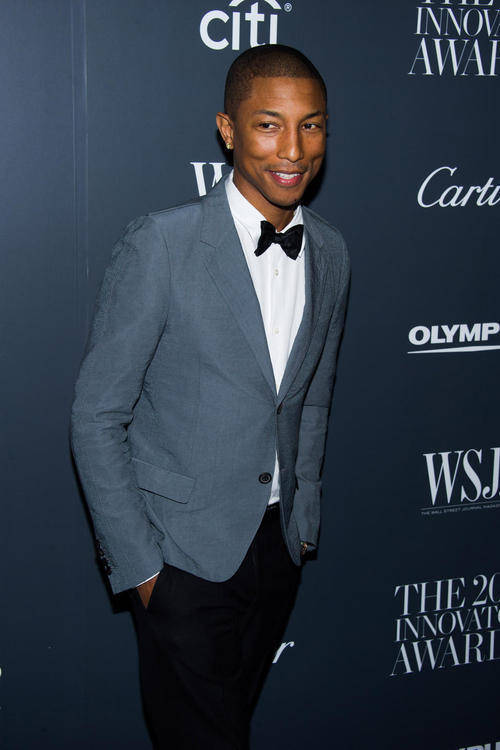 As part of Stereogum’s year-end coverage, The 2013 Experience, this week they’re presenting a series of interviews with the producers of our favorite songs of the year. First up, Pharrell Williams While Kanye and Miley might have managed to snag the lion’s share of headlines over the past year, few artists actually had a more successful 2013 than Pharrell. Always one with the midas touch when it comes to savvy collabs and an uncanny ability to be at the right place at the right time, Pharrell figured prominently in 2013′s most massive (and seemingly unavoidable) gangbuster singles: Daft Punk’s “Get Lucky” and Robin Thicke’s “Blurred Lines.”

In addition to those globally inescapable chart toppers (“Blurred Lines” reached the No. 1 spot in more than 13 countries, meaning there is almost no place on Planet Earth where you won’t hear it), Pharrell also logged studio time with a laundry list of 2013 hit makers — Miley Cyrus, Pusha T, Azealia Banks, the Weeknd, Mac Miller, 2 Chainz, Jennifer Hudson among them — while also managing to whip together something as simple as a 24-hour-long music video (“Happy” from the Despicable Me 2 soundtrack) and snag Seven Grammy nominations, including a nod for Producer Of The Year. While it’s hard to imagine him having an even bigger 2014, it doesn’t mean that Pharrell won’t be trying. I called him up in Miami for a quick chat about his recent string of hits and all the things he loved in 2013.

STEREOGUM: What can you say about the experience of this past year?
PHARRELL: It’s been amazing. First and foremost I look at it like … the people. They vote for the songs, they share the songs with their friends, they stream the songs, they talk about the songs, and they purchase the songs. And without that type of reaction there is no “huge,” there is no “big,” there is no “successful.” If you’re successful it just means that the people spoke. So I’m sort of indebted to the people. And personally, I’m indebted to God and the universe for giving me the time. Without time, opportunity means nothing. All those things are factors for me.

STEREOGUM: Were you surprised at just how crazily successful “Blurred Lines” and “Get Lucky” turned out to be? Did you have a sense early on that these tracks were going to be massive?
PHARRELL: No. You only have a sense of what feels good to you personally. The success of the song is predicated on how everybody else feels when they hear it. If they feel something enough to say they like it, great. If they feel something enough to say, “I like it and I want to tell somebody else about it,” then that is magical. That’s where all of this comes from. It comes from the idea that people are connecting and sharing the things they feel sentiment about.

STEREOGUM: I’ve always been fascinated by the role of producers and how they interact with the artists. You’ve been fortunate to work on both sides of that equation. Has the experience of working as a producer changed a lot for you over the years?
PHARRELL: The experience? The process? Not really. You have a gut feeling and you go after it until you feel like it’s done. It’s like sculpting an idea. Sometimes you chisel it along the way, or sometimes you need more clay.

STEREOGUM:: What were some of the personal highlights of this past year for you? Any unexpected surprises?
PHARRELL: I think all of this has been unexpected because so much of it has had to do with utilizing my voice. That’s still a new experience for me. I’ve always been behind the keyboard most of the time, so now, to sort of be on both sides of the keyboard, to make music and then to also have my voice on the songs, was a different experience. A very different experience. But it’s been really nice.

STEREOGUM: The whole rollout of the Daft Punk album was pretty incredible. It’s kind of rare that you see that level of anticipation for an album these days.
PHARRELL: It’s always fun working with the robots. They did “Hypnotize” on the last N.E.R.D album and we remixed “Harder Faster Stronger” more than 10 years ago with them. So we always had a great relationship with the robots and all of their crew. There’s always been love there for us.

STEREOGUM: Is it a pretty collaborative experience working with them?
PHARRELL: When they brought me in the studio, that track was done. They just asked me to write on it.

STEREOGUM: So how long did it take for “Get Lucky” to come together?
PHARRELL: I think after an hour or so I had written it, but then after I had written it we did a bunch of takes so that they got absolutely what they needed. You know those guys are perfectionists.

STEREOGUM: Still, an hour! That seems amazingly fast.
PHARRELL: Well the music was done. The rest of the song kind of wrote itself.

STEREOGUM: Yeah, that’s kind of the ultimate dream. I remember reading that you had wanted to work with the Strokes at one point and I kept wondering what that pairing would have sounded like. Are you interested in working with more rock bands?
PHARRELL: Yeah. I love working with rock, just like I love working with anything else. Country is always interesting to me as well. I’ve not yet had the good fortune of saying I’ve done many records that are in that vein, but I’ve just done things that hinted at it. I did this record on Miley’s album called “4X4,” and there’s another one called “Rooting For My Baby” that we did maybe 10 years ago and we finally found the right home for it on her new record. And she sang the hell out of it.

STEREOGUM: What were some of the records you loved this year that you didn’t actually work on?
PHARRELL: Oh yeah there’s a bunch. First of all Lorde’s album is genius from front to back. Bookend to bookend. Lorde is a phenomenal, phenomenal artist. Kendrick Lamar’s album was genius. And I was lucky enough to be a part of it, but his album — aside from my song — is genius in itself. Lyrically, to me, he’s just one of the best. And I think his music picking, the beats that he picks, the choice of songs … he’s got a really great ear. I love what Drake did this time around. I think Drake is masterful with his work. I think Tyler, The Creator is in a really good place right now. I think Taylor Swift has mastered her audience and what it is that she loves to do. You can say whatever you want, but they’re great lyrics, and she knows what her audience wants and she knows that good feeling. There’s another girl, Banks, who’s crazy. So good.

STEREOGUM: Yeah everybody is excited about her.
PHARRELL: She is something special. This band HAIM is amazing. London Grammar is great. Oh yeah and Pusha T is having an amazing year.

STEREOGUM: Yeah, I think that’s one of the best records of the year.
PHARRELL: Yeah, he’s having an amazing, amazing year.

STEREOGUM: You’ve been doing a lot of scoring work and I know you are currently working on the score for Spider-Man 2. How’s that experience?
PHARRELL: You know what, the crazy thing that Hans Zimmer and I put together for it is really fun. Hans is an amazing guy. So you know, if my only contribution was to pay for his coffee I’d be happy. But he’s giving me really generous creative real estate and we’re just basically filling up the canvas. But the idea, the concept we had for it, just kind of … I don’t know man I’m just really happy to be a part of it. I’m having a really good time with it.

STEREOGUM: Your capacity for multitasking is amazing. You’ve always been slightly ahead of the curve in that way — one of those people who can do a little bit of everything.
PHARRELL: I just think you’re being incredibly kind.

STEREOGUM: Can you say what you have in store for 2014?
PHARRELL: Music, music, and more music. And I’m just so thankful and happy and proud of where music is going. This particular generation doesn’t think within the same boundaries as people did back in, say, the ’90s. They completely recognize their freedom to make any kind of music they want. They’re not making music to get on the radio. They’re making music the way people have traditionally made music — especially in the ’60s and ’70s, they made it for their respective cultures. And so the music felt that way. You know when someone’s musical intention was jubilance. There is something to be said for making music that is jovial — creating songs to make you chipper. Songs to bring joy. I tried to tap into that a little this year with these songs because that’s just what I felt. I wanted to make people happy.