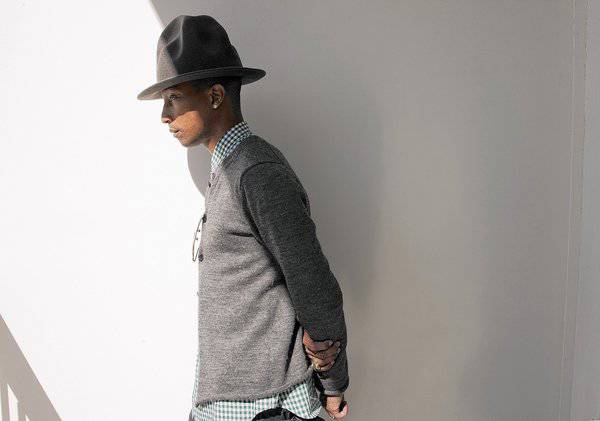 By Mikael Wood. Photo by Gina Ferazzi. Even before his Oscar-nominated hit single ‘Happy‘ sent him out on the publicity trail, singer-rapper-producer Pharrell Williams had plenty of projects piled up. Pharrell Williams looked wiped out. Late on a recent evening, the singer-rapper-producer was shuttling between two studios at a Melrose Avenue recording complex. In one he was working on music for this spring’s “The Amazing Spider-Man 2,” which he’s scoring along with Hans Zimmer; in the other he was supervising final mixes for his upcoming solo album.

Now Ryan Seacrest’s people had arrived to shoot Williams‘ cameo in a video, set to his song “Happy,” marking the 10th anniversary of the radio host’s popular morning show. “You ever get that feeling on a long day,” Williams asked no one in particular, “where the only thing that feels good is …” And with that he let his face slacken into a kind of open-mouthed zombie expression.

Always a busy guy — in 2013 he helped create two of the year’s biggest pop hits in Robin Thicke’s “Blurred Lines” and Daft Punk’s “Get Lucky” — Williams has been in even higher demand lately, thanks in large part to his first Oscar nomination. “Happy,” from “Despicable Me 2,” is up for original song at the Academy Awards, to be held March 2.

A cheery gospel-funk number Williams said he modeled after Curtis Mayfield, “Happy” serves in the animated movie as a means of humanizing Gru, the grumpy villain voiced by Steve Carell. But it’s also done brisk business as a stand-alone single, racking up more than 75 million streams on YouTube and an additional 45 million on Spotify. On Wednesday it sat atop the iTunes single chart and at No. 2 on Billboard’s Hot 100.

“When you look at the history of songs written for films, the ones that’ve broken out to have a meaningful life beyond the film are very rare,” said Chris Meledandri, whose Illumination Entertainment made both “Despicable Me” films for Universal Pictures. “There’s an infectious quality to ‘Happy’ that just resonates.” Still, “Happy” faces stiff competition at the Oscars from “Let It Go,” the sweeping ballad sung by Idina Menzel in Disney’s smash “Frozen,” and “Ordinary Love,” the feel-good U2 song from “Mandela: Long Walk To Freedom” that last month won a Golden Globe. So before he began his recent night at the studio, Williams, 40, was up early on the campaign trail, sitting for morning television interviews (wearing the hat he made famous at January’s Grammy Awards) and then attending the Motion Picture Academy’s annual Oscar nominees luncheon at the Beverly Hilton Hotel.

On Sunday he sang “Happy” at the NBA All-Star Game, and Wednesday night he did the song at the BRIT Awards in London — each appearance a valuable opportunity for exposure before final Oscar ballots are due next week. He’ll perform “Happy” yet again on the Academy Awards telecast.

“This is probably the most I’ve ever been humbled in my entire life,” Williams said of the song and the reaction to it, “because it’s something bigger than me, bigger than anything I’ve ever done.” That’s a weighty claim. Working with Chad Hugo, his partner in the production duo The Neptunes, Williams did as much as anyone to expand the sound of hip-hop in the late ‘90s and early ’00s with slinky, mechanized beats for the likes of Jay Z and Snoop Dogg.

The Neptunes went on to produce huge pop hits, such as Britney Spears‘ “I’m a Slave 4 U” and “Rock Your Body” by Justin Timberlake, and in 2003 Williams put out a single of his own, “Frontin‘,” that showcased his goofy wordplay and cool falsetto. Since then he’s continued to collaborate with Hugo (in both The Neptunes and their psychedelic rap-rock band N*E*R*D) yet Williams has also become increasingly visible on his own: as a songwriter and producer, an Internet entrepreneur, a designer of clothing and luxury items and, in the spirited videos for “Blurred Lines” and “Get Lucky,” what we might call a bringer of good vibes.

Indeed, though he describes “Happy” as a team effort between him and the “Despicable Me” crew, Williams seems to be using the song’s awards-season buzz to propel his latest crack at a solo career. On Wednesday, Columbia Records announced that it will release Williams‘ solo album, “G I R L,” on March 3, the day after the Oscars.

The singer was cagey about the record’s sound, saying only that “the criteria was that I wanted it to feel festive and celebratory,” qualities certainly in keeping with “Happy” and many of the other songs he had a hand in last year, including Miley Cyrus‘ “#Getitright” and “Blow” by Beyoncé. “Pharrell always brings such an amazing energy to whatever he’s working on,” said Jennifer Hudson, who drafted him to oversee her 2013 single “I Can’t Describe (The Way I Feel),” one of several songs the Recording Academy cited in presenting Williams with a Grammy for producer of the year. “When I hear one of his songs, I’ll be like, ‘Why am I feeling so good? Oh, because it’s a Pharrell track.’ “

Columbia head Ashley Newton added that “G I R L” exudes a confidence that Williams might not have had previously — for instance, when he put out his first solo disc, 2006’s “In My Mind,” which sold fewer than half a million copies and earned lukewarm reviews. “All his moves are so right at the moment,” Newton said. “He’s someone who can feel his own creativity swirling around, and that just changes a person’s demeanor.” At the recording studio, where the clock was nearing midnight, Williams appeared less ready to take over the world than ready to go to bed. But as the effervescent groove of “Happy” came pouring through a set of speakers again, he adjusted his trademark hat and cracked a sleepy grin for the camera. Back to work.