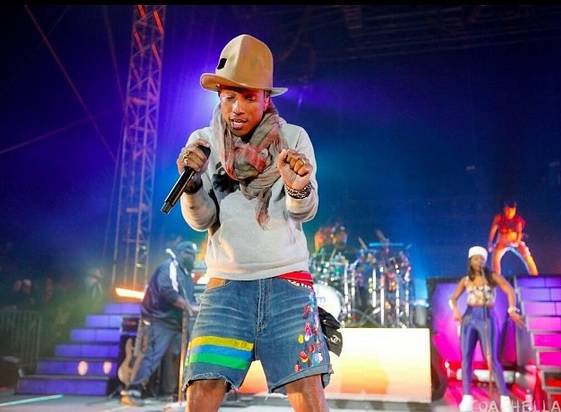 By Ernest Baker. Pharrell’s been making music for 20 Years and he’s been a superstar for well over 10, but by some strange twist of fate, at 41, 2014 is becoming the best year of his career. While Pharrell’s largely known for his production for everyone from Jay Z to Madonna, he’s never been a behind-the-scenes type of producer.

Either. His guest appearances on songs like Snoop Dogg’s “Drop It Like It’s Hot” and Robin Thicke’s “Blurred Lines” are a huge part of what made those songs No. 1 hits, but the public’s still found it difficult to embrace Pharrell The Solo Artist. Until now.

“Happy,” the lead single from his new album, G I R L, is a certified phenomenon, and it’s finally given Pharrell a No. 1 hit of his own, topping the Hot 100 for seven weeks now, and showing no signs of slowing down. A No. 1 song is already an accomplishment, but a near two-month run at No. 1 transcends popular.

That’s when a record becomes legend, and only a handful in history have had a streak this good or better. Noisey a quick conversation with Pharrell about what it feels to have the biggest song in the world, why this album means so much more than his debut, and why he owes everything to the people.

Noisey: “Happy” is more than a No. 1 song. It’s a moment in pop culture. What does that feel like?
Pharrell: It’s been amazing, because I know that it’s not my doing. Yes, I’m the author of the song, but the people are the author of all the success. When you say the words “big,” “huge,” and “successful,” what you’re really referring to is how the public reacted to something. Every time someone votes or requests or downloads, they’re contributing to the movement that “Happy” has become. They’ve pushed it to number one. The only thing I could do is make a song. But how many great songs are written every day? They’re not all promised this type of reaction. When you’re young and you’re doing it, you think it’s you, but when you‘ve been doing it as long as I have, you realize it can be great but there are sliding factors that move like plate tectonics. You’ll see them time and time again when you thought something was going to blow but it didn’t for whatever reason. I’m just really happy that the universe has conspired to give us this kind of moment and I intend to continue to be loyal to it. Just like “Happy” is not preachy, it’s just the information is there should you want it; that’s how I intend to do my music.

Is it gratifying that all of this is happening with such a positive song? I loved The Wolf of Wall Street because of all the fucked up things they’re doing. We know the appeal that dark art has. But “Happy” makes me think there’s a shift in the mood of the population. My mom texted me out of the blue like, “I love that Pharrell song.” I think that’s a place you can’t get to when it’s negative content. It takes a certain type of message and a certain type of outlook.
Who expects that it’s going to do this? It’s unreal. I’m just grateful to all the people who felt like the song resonated with them. And G I R L for that matter. It’s been so warm and so kind. Even though my work isn’t perfect, I think what everybody is understanding is that the common denominator is to make sure that it can, aesthetically, have a value. Yes, I hear the sounds, but what am I feeling? That’s the way things are moving. The definition and the meaning behind the word quality will change this year. You’ll see it change really fast. It used to be that Ferrari. It used to be that check. But now it’s going to be, “How does that building feel when I walk in it? How does that song make me feel when I was singing it? How was my online experience when I visited that site?” Feeling will become king again, and it used to be that way. When I was a child, you would hear music and you felt it. Hearing an O’Jay’s record like “Cry Together,” I didn’t know what they were really talking about. I was too young, but I could feel it. I think across all sub-modalities and senses, you will notice that the one that will reign supreme this year will be all about feeling.

I’m fascinated by your thoughts on your first solo album, In My Mind. There’s a quote where you’re like, “That wasn’t joy. That was just bragging.” But that bragging gave some of us joy. There are people who think In My Mind is a classic record. You said, “Man, what was I talking about?” in reference to the “they see me on TV, the cuties they wanna fuck” lyric, but lines like that inspired a lot of us. That Transformers car in the “Can I Have It Like That” video. I’ve realized there’s value to things outside of material objects, but being young, watching TV, there was some feeling to that. I’m intrigued by the fact that you seem to be in a new space and kind of regretful about the type of music that you were making on that album.
Okay, so let me be clear. I was being overly passionate at the time. There was some feeling in that music and I was very emotional at the time, but that has a lot to do with the hue for me, over that moment. It’s kind of like when your phone starts to go to sleep, it dims before it goes out. The reason why that was dim to me is because it was a tumultuous time in my life. I was going through something. Just taking it all in, going wild. I found myself making music to be competitive with my peers. That’s why I felt all the N.E.R.D albums were much more holistically medicinal than the In My Mind album. The In My Mind album was kind of like, “I’m that guy, I’m that guy, I’m that guy, I’m that guy.” When you look at this body of work, you’ll see that selflessness gives you a weightlessness that is a completely different experience. Yes, the other one was emotional, and emotions are like rollercoasters, but this album is like a plane. It doesn’t have any tracks. It’s just this weightlessness because I’m not thinking about myself and, if anything, I’m just really giving my appreciation to women. The album is a love story people can appreciate for themselves.