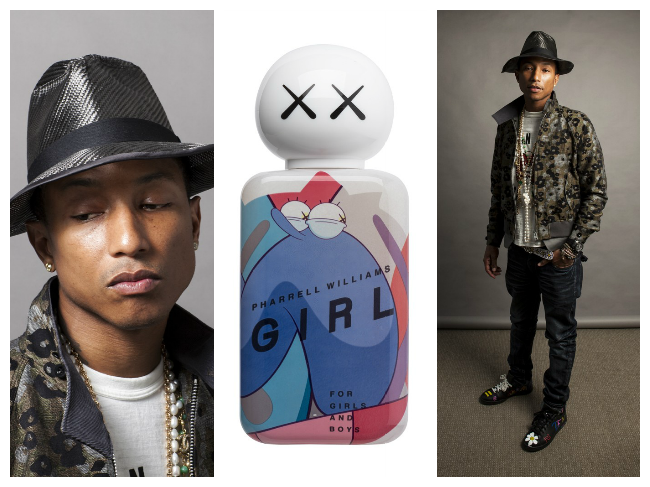 7 things you need to know about G I R L’s Fragrance. Pharrell Williams’ foray into the beauty world is making us extremely happy over here at Grazia HQ, as the super-cool singer/rapper/producer has just broken the silence on his much-anticipated fragrance collaboration with Comme Des Garcons. When Pharrell first unveiled his plans for the new scent, we were seriously excited. After all, this marks the first time the fashion house has teamed up with a musician to create a fragrance.

And heck, this isn’t any old musician. We’re talking the hottest man on the musical block. Out in September, the new (and unisex, FYI) scent shares a name with Pharrell’s second studio album, Girl, which rolled out in March. So, ahead of the fragrance launch, read on to discover the 7 things you need to know about the new scent… Pharrell Williams Girl will be available from September 1st from Dover Street Market, London

1. It’s a whole new spin on a unisex fragrance
Don’t be fooled by the moniker—the heady wood, white pepper, and lavender blend is actually a unisex scent, and a pretty swanky one at that. As Pharrell himself said, “We just found another way to say unisex.”
2. His love for perfume started with Ralph Lauren
In a recent interview, Pharrell admitted that his fragrance journey started way back with Ralph Lauren Polo, saying, “It was kinda cool to me.”3. …But following his teens, he didn’t wear scent for 15 years!
4. The bottle is beyond swanky
In fact, the bottle, logo and packaging have all been designed by House + Holme, featuring bold, cartoonish artwork by artist Kaws, a close pal of Williams’.
5. The making of Girl was an easy feat for the singer
As Pharrell explains, “We had the best nose in Paris, I was working with the best brand- so there was not much of a struggle… I was working with the masters of the artistic universe.”
6. The new scent will have its own art exhibition
Next week, an exhibition curated by Williams called ‘Girl’ will open at Emmanuel Perrotin’s new space in Paris, the Salle de Bal. It will showcase 40 works by mostly female artists including Marina Abramovic, Sophie Calle, Cindy Sherman and Tracey Emin.
7. The new fragrance is the final flourish for Pharrell’s creative energies
“For each of our senses there’s an art form: For ears there’s music, for your eyes there’s art, for your nose there’s fragrance, for your taste there is the culinary art, for feeling I say there is love.”