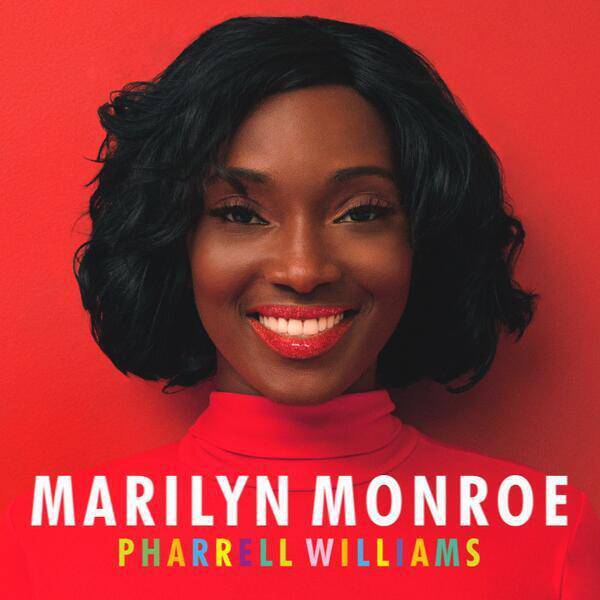 Last week, the ever-“Happy” Pharrell dropped a new video for his new single “Marilyn Monroe.” Following the controversy surrounding the absence of brown skinned women on his G I R L album cover, fans and critics alike had much to say about the image of the stunning Khadijah Nicholas chosen for the single art, which features her dressed in red and looking much like a chocolate version of the late actress. 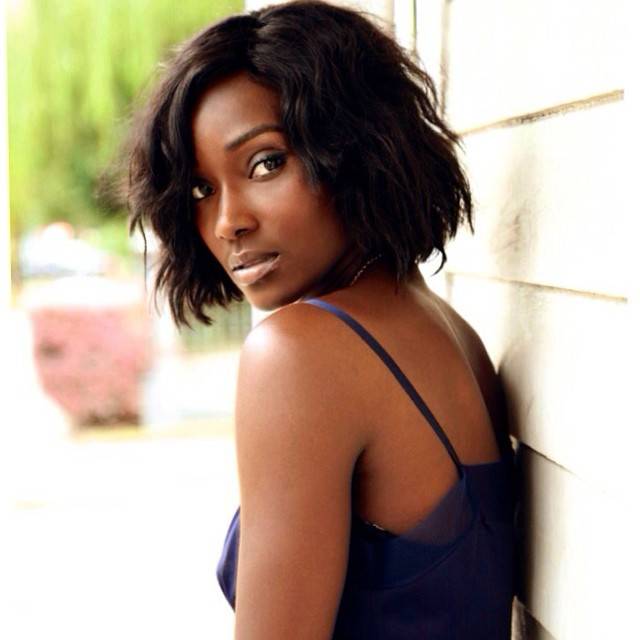 Born in Trinidad and raised in Brooklyn, 26-year-old Nicholas is a professional dancer who recently traveled the world with Rihanna on her “Diamonds” world tour and has danced with Beyoncé. EBONY caught up with the brown-skinned beauty to talk about her experience working with Pharrell, the message behind the song and music video and how she felt about all the chatter. 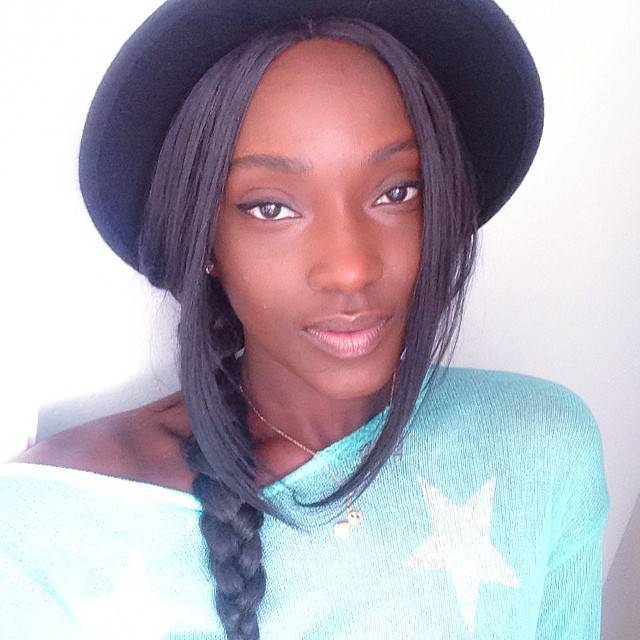 EBONY: How did this all come together for you?
Khadijah Nicolas: I got an email about an audition for Pharrell’s “Marilyn Monroe” video…after getting the booking, we went to the video set and it was like a “Who is that girl?” moment. Pharrell saw me in the red leotard and said “Yo, I think I have this vision.”

EBONY: What was you reaction to him asking you to be on the cover?
KN: I was like “What? What’s going on,” just laughing or whatever. In the last take, he came in with his big red hat on, and I asked him could I take a picture in it, and he said “Well, can I take a picture of you?! So we did the shoot and towards the end he asked for pictures of me from the neck up. Then he told me he wanted to use me as the single cover. I asked him “Um…..are you sure?” and Pharrell just said he was very serious. So we exchanged information, but I still didn’t think too much about it. You just never really know what is going to be the finished project. But Monday I was taken by surprise. I didn’t know it was going to be released, and it was a pleasant surprise. 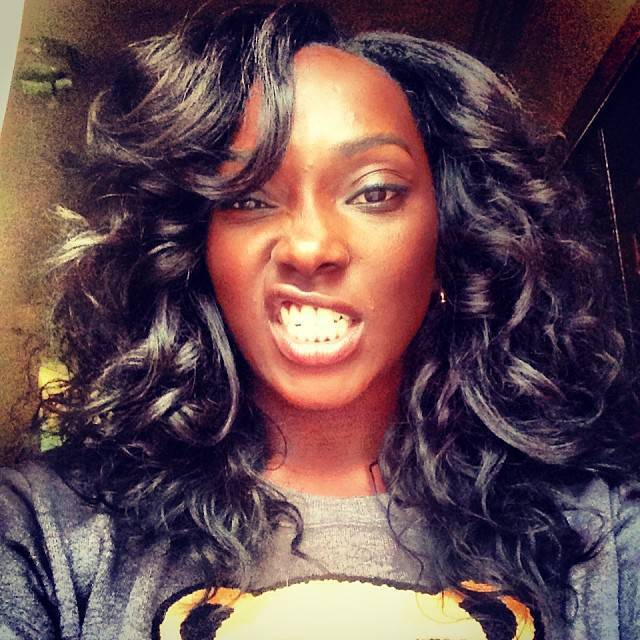 EBONY: Aside from yourself, the video for Marilyn Monroe has female dancers across many different racial backgrounds. How does the video portrayal connect with the song?
KN: It was a ‘power to women’ video. All statures, colors, ethnicities, types, sizes, etc. It’s to bring light to a different woman—-“Not even Marilyn Monroe, not Cleopatra, not Joan of Arc.” And I think he did an exceptional job of portraying many different types of women in this video.

EBONY: What was your role in the video, as far as combating those ever pervasive beauty standards?
KN: Well.I can say it wasn’t some sort of comeback for the backlash he received about the album cover. It was more so “This is the different girl I would like to represent. I like what she stands for, her presence, the difference in her features, her skin tone, the way that she moves.” And I was honored to have the chance to be that representation of that different girl.

EBONY: But there are some critics who say Pharrell is just using this girl with darker skin to appease the fans who at first were mad about the perceived absence of a Black woman and who were then still upset when they found out there was a very light-skinned one there, because they feel it played to a whitewashed beauty standard.
KN: I think it’s completely wrong. It’s a wrong way to think. But at the same time, I just want people to be a little more responsible. Like, do your research, think about the situation more. At least look up the work that he’s produced over the years. He’s always given love to many shades of women. Even on his “Frontin” cover, he had Lanisha Cole from the video as the cover of the single. He’s even talked to me about how his dad is dark-skinned, how it wasn’t a matter of not featuring a dark-skinned girl on the cover. He chose those girls because he wanted to. But the girl is Black. Is she Black enough? Maybe not for you, but she is Black. So how you can say now that “Oh, he’s doing this just because…?” I don’t think that makes sense. At the end of the day, people are entitled to their opinion, but I would just like them to do a little more research. Learn about the people, and not quickly judge what you see in front of you.

EBONY: What’s interesting, too is that some people were also mad because Marilyn Monroe is this white icon, so why would you have a Black woman stand in for her? It seems their logic is “Well, if it were a Black icon and someone changed the race to White, there would be plenty of people mad as well.”
KN: Here’s the thing. I understand the criticism in that sense. But again, it goes back to saying, the song has nothing to do with reinventing Marilyn. People have to look past the song title. If it didn’t have the song title, and it just had “Pharrell Williams,” would you have the same type of reaction to the picture? At the end of the day, this is the music industry. Artists do things to challenge the mind, to form new creativity in peoples mind. It’s 2014. He wanted us to look at the picture and ask what’s behind it, how does it challenge the way I think about things? How does it shed light on women of color? That’s how I took it. Now, I could be wrong, but I still feel like critics should take the time to listen to the song and see the meaning of representing a different woman, who just happened to be a dark-skinned dancer.

EBONY: And if you look at it from a different standpoint, Marilyn Monroe challenged beauty standards of the time. Her body type, the way she carried herself, how she owned her sexuality, and the conceptions of….
KN: Who she was! You can’t compare me, anything I’m doing, or any other woman that could be in my position to what Marilyn Monroe stood for. She is an icon, I couldn’t take her place. People even commented on the picture saying I was the new representation of the modern day home-wrecker. You can’t use that. But what are we going to take from it? The fact the she challenged sensuality Americans were allowed to display in the public eye at the time. She changed the public’s mind about being okay with your body and your sense of sexuality. That’s what I got from Marilyn, and that has nothing to do with her race. But if you look at what’s on TV today, are your really going to criticize me or her? As far the portrayal we have of Black woman, are you going to take Pharrell’s high road, or the reality show road? And that’s no disrespect to any of those women, but at the same time, try to see the bigger picture. That’s all Pharrell was trying to do, and it’s a huge move forward for anyone, despite her color. You can be beautiful without being an icon or being compared to one.

EBONY: In this moment where is Lupita is on the cover of People as the “Most Beautiful” person and you get the single cover for a high profile musician, who does this inspire?
KN: You know what’s interesting? The Lupita cover isn’t a surprise for me, because she’s a huge inspiration for women of any color. The fact that she’s coming from another country, and has become as successful as she has in a short amount of time lets you know that anything you believe in, you can make happen. The fact that Kim Kardashian is on the cover of Vogue is a little girl’s dream realized. It’s not about color. The fact that you can dream and say “You know what, one day this might happen. I can make this happen”… You also have to look at it as timing. You have people saying “Dark skin is in right now,” but when were we ever out? Are you saying I was irrelevant at 3? At 12? At 21? What? Granted, times have changed, conceptions of beauty are still changing, and we have a forum to speak on these things now. For our Black community, and the Black girls growing up, it is an inspiration. But at the same time, it’s an inspiration to see any woman succeed.