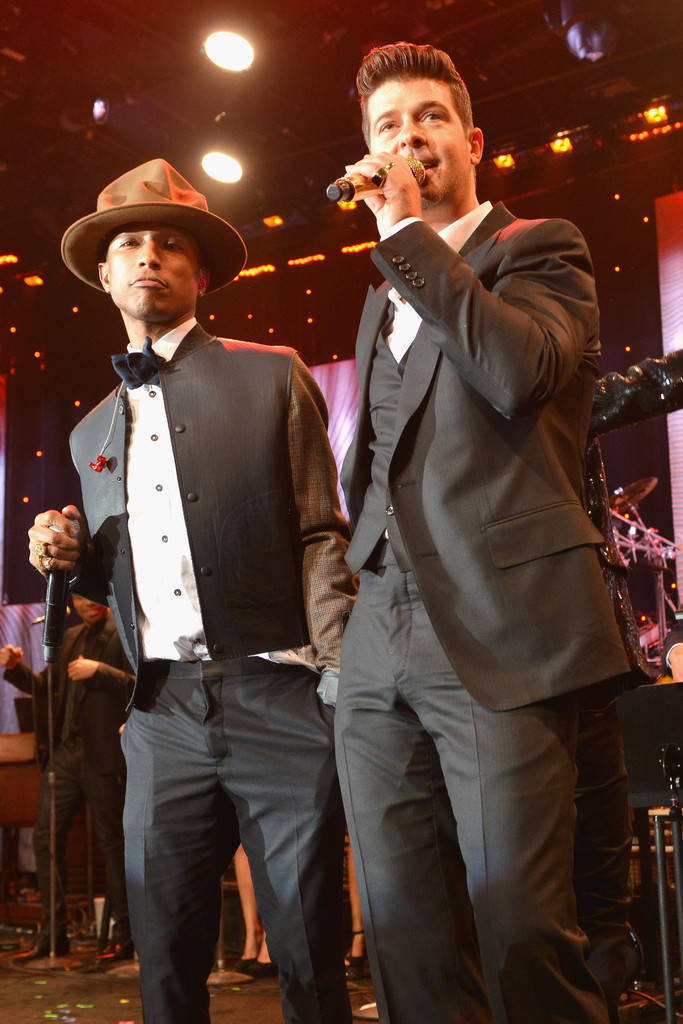 A California judge rules that Marvin Gaye’s family has made a sufficient showing that elements of “Blurred Lines” may be substantially similar to “Got To Give It Up” In a ruling that could set up one of the biggest trials ever over alleged song theft, U.S. District Judge John Kronstadt on Thursday denied Pharrell Williams and Robin Thicke’s motion for summary judgment in a lawsuit that explores the origins of the blockbuster hit “Blurred Lines.”

The two musicians filed a lawsuit in September 2013 after receiving threats from Marvin Gaye’s family, who contend the song is a knockoff of “Got To Give It Up.” The lawsuit sought declaratory relief that “Blurred Lines” was non-infringing, painting the defendant as attempting to claim ownership of an entire genre. That led to a countersuit where the Gaye camp asserted that the song was indeed infringing, that Thicke had a “Marvin Gaye fixation,” and that he had also copied a second song, “Love After War,” from Gaye’s “After The Dance.”

Both sides trotted out musicologists and mashups, debated the nuances of copyright law and even addressed Thicke’s wild deposition comments admitting drug abuse and lying to the media. The end result is Judge Kronstadt’s conclusion that the case shouldn’t end now. The Gaye family, he writes, has “made a sufficient showing that elements of ‘Blurred Lines’ may be substantially similar to protected, original elements of ‘Got to Give It Up.’ Defendants have identified these with particularity for purposes of analytic dissection.”

The judge also refuses to allow Williams and Thicke to win at this juncture on claims tied to “Love After War.” The ruling isn’t a complete loss for the singer and his producer. There was much controversy between the two sides as to whether Gaye’s copyrights are limited to sheet music compositions or whether they extend to features heard on the “Got To Give It Up” sound recording. For the purposes of the analysis, the judge looks to the 1909 Copyright Act, which would have given the Gaye family the right to include more than just the sheet music if the work was published with proper notices or part of necessary deposits at the Copyright Office.

The judge concludes that the Gaye family hasn’t sufficiently shown it did either, and thus, they “have failed to produce evidence that creates a genuine issue as to whether the copyrights in ‘Got To Give It Up‘ and ‘After the Dance’ encompass material other than that reflected in the lead sheets deposited with the Copyright Office.”

As a result, the analysis of whether Thicke’s “Blurred Lines” is substantially similar to Gaye’s “Got To Give It Up” won’t examine such things as the congruence of percussive choices or backup vocals, though there may or may not be some trial attention on such features in the intrinsic analysis (the judgment of an ordinary person). That issue seems likely to come up again given the reactions by the lawyers provided below. Judge Kronstadt also addresses Thicke’s deposition comments where he admitted that he had lied to the media about going into the studio with Marvin Gaye in mind and that in fact he didn’t have much to do with the creation of “Blurred Lines.”

This came up because copyright law has a concept called the “inverse-ratio rule” where lots of access to a song necessitates less proof of similarity. The judge writes that “Thicke’s inconsistent statements do not constitute direct evidence of copying,” though that hardly helps him today because Marvin Gaye is nearly universally known and Williams and Thicke “concede access,” basically meaning they’ve at least heard Gaye’s 1977 hit. A trial is currently scheduled for Feb. 10, 2015. Howard King, attorney for the plaintiffs, had this comment about the ruling:

“The ruling is not surprising given the extraordinary difficulty in prevailing at the summary judgment stage, especially where each side offers conflicting opinions from multiple musicologists. Although our musicologist, Sandy Wilbur, correctly testified that there are no two consecutive notes in the two songs that have the same pitch, the same duration, and the same placement in the measure, the Judge concluded that sufficient disagreement about other elements of the compositions warranted denial of the motion.

We are gratified that the ruling significantly limits the issues going forward by finding that the Gayes cannot assert any infringement claim for elements not included in the sheet music deposited with the copyright office, which effectively eliminates 5 of their 8 claimed similarities. The jury will now decide this case on the merits, limited to what is in the written composition, without being influenced by the sound recordings. Since the compositions at issue are completely different, we remain confident of prevailing at trial.”

Richard Busch, attorney for the defendants, had this to say: “We believe the evidence of copying of Marvin Gaye’s legendary work ‘Got to Give It Up’ is overwhelming and now look forward to trying the case. We also disagree with Mr. King’s assessment that the Court ruled that there will be any limitation on what the jury considers at the trial, which involves a different analysis than what the Court analyzes on a motion for summary judgment.”