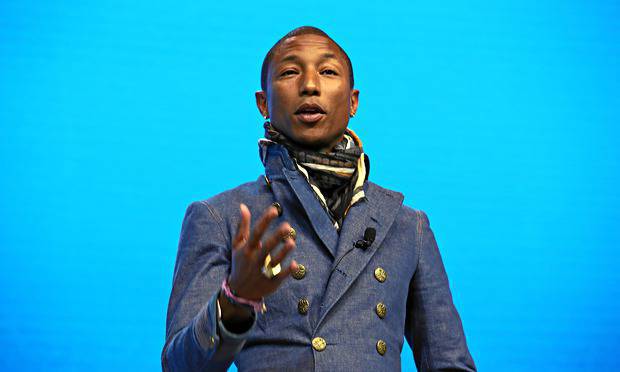 What is driving Pharrell Williams’s new global conscience as he joins Al Gore’s fight against climate change? For the American music producer Pharrell Williams it was an I’d like to Teach the World to Sing moment. Last week he and Al Gore, Nobel peace prize winner and former US vice president, announced a concert over seven continents that is designed to build support for a UN climate pact in Paris at the end of the year. Some uncharitably wondered whether Pharrell had entered into a new, messianic phase of his career – one typically signalled by joining a society of billionaires and retired political figures in the Swiss ski resort of Davos.

Others said the global hitmaker was too cute to go along with anything that smacked only of an ego trip. “I think you guys know how serious the global warming thing is, and so for us we’re taking it very seriously, and we wanted to do something very different this time,” Pharrell said in Davos. What he means by having “humanity harmonise all at once” might remain slightly mysterious, but organisers say they expect 100 acts performing before a broadcast audience of two billion people across seven continents, including Antarctica.

Pharrell, whose song Happy was the bestselling single of 2014 and who was recently described by US GQ as “a quiet little Egyptian space cat of a dude”, is known for getting things done – at least in music. As the magazine recently described, besides being a pop star in his own right he has become a kind of a musical consultant for other artists who guides you toward your “twinkling star”. Singly or as one half of the producing duo The Neptunes, he’s worked with Missy Elliott, Gwen Stefani, Beyoncé, Solange, Jay-Z, Daft Punk and Robin Thicke to name a few.

His prodigious output – he wrote his part of Thicke’s Blurred Lines in half an hour – has made him the most important and productive music producer of the era. “I am a slave only to my curiosity,” he said recently. Music executive Davitt Sigerson, who signed Pharrell to his first production deal after hearing a song remixed by the girl group SWV, recalls Pharrell, who comes from Virginia Beach in the state of Virginia, describing how he had stayed on a park bench when he first arrived New York in an attempt to break into the music business.

The experience found its way into a song. “He’s clearly unbelievably smart, open-minded and unthreatened,” recalls Sigerson. “Everything that’s happened since is unsurprising. He could clearly do anything he wanted.” Pharrell’s hit Happy, from the soundtrack to Despicable Me 2, proved so popular worldwide that hardliners in Iran were moved to arrest eight performers of a lip-sync tribute video. The incident may have helped to inform Pharrell’s global conscience; certainly, it showed him that his music could inspire across the globe.

There’s no delay in pop culture consumption in Iran, points out Iranian-American author Hooman Majd. He believes the Iranian authorities would not have clamped down on the Happy video people if it had not become so popular and attracted media attention in the west. Tehran police said the clip was a threat to “public chastity”. “It’s not like the authorities don’t know what their youth is like and what they do – it’s that they feel obliged, because of hardline sentiment, to confront the youth when something becomes too big to ignore,” says Majd.

Iranian president Hassan Rouhani later responded, indirectly, saying that young people should not be harassed for being “happy”. In his comments, Pharrell said: “It’s beyond sad that these kids were arrested for trying to spread happiness.” He also spoke out after a Missouri jury refused to indict a white police officer in the death of Michael Brown, an unarmed 18-year-old black man, last August. “Everyone is heartbroken,” he said. “It’s another teen, unarmed teen gunned down.” Pharrell appears to be settling into his role as a multimedia prophet.

He has given himself over to invocations of pseudo-mysticism, recently explaining: “It’s all math. You have a certain number of bones in your body. You have seven holes in your face. There are nine planets, a sun, trillions and trillions of galaxies. Everything quantifies to numbers.” He’s been described as pop’s Bill Clinton – “a masterclass in charm and empathy”. Of course, that’s a lot more entertaining than the business of licensing fees, rights and credits that makes up the day-to-day running of a music production operation, his unusual side-group N*E*R*D (No-one Ever Really Dies), and an empire of spinoffs including Billionaire Boys Club and Ice Cream apparel, and a textile company, Bionic Yarn.

The pop success that Pharrell enjoys was a dream when, aged 17, he formed an R&B band with schoolfriends called The Neptunes. Discovered in a high school talent show by Teddy Riley, the originator of new jack swing, Williams initially wanted to be a soul singer. “Yes sir!” he later recalled. “That was the dream back then. But then I started writing songs, and producing them, and realised I could love that just as much.” Under Riley’s direction, Pharrell and bandmate Chad Hugo picked up writing and production credits. “When I was growing up, doing something like this never seemed like a possibility. It wasn’t on my wish list. I just figured I’d study my ass off and try to be some kind of art professor.”

The Neptunes’ big break came in 1999 when they produced the whole of Kaleidoscope, the debut album by a hot new talent named Kelis. Two years later Pharrell had a global No 1 single with Britney Spears’s I’m A Slave 4 U. Pharrell says the trick in producing other people is to drop his ego. “I say to the artist, whether it be Beyoncé or Usher, what do you want to do? And when they tell me, I say, OK, let’s do it like this. It’s real simple.” Like Prince, Pharrell surrounds himself with women – his assistant, Cynthia Lu; art director Phi Hollinger; and Fatima Robinson, his choreographer. “Women have a way of expressing themselves that I can relate to more honestly,” he told GQ. “I am a sensitive person, so I want to be with sensitive people.” His only failure, it seems, was with his own solo album, In My Mind, in 2006.

“No, I did not enjoy that!” he told interviewer Ian Gittins in 2010. “It was just too much work. I was all by myself and it is kind of harder when it is your name on the front of the record. Every one just kept saying, ‘You! You! You!’ And I was like, ‘No! No! No!’” Now aged 41 and with an estimated net worth of $80m, Williams is determined more than ever to have his success on his terms. “He’s too bright to be used in any way he doesn’t want to be used but he’s not precious either,” says Sigerson. “So it doesn’t surprise me he might be connecting to things that are a bit more interesting than singing on a charity record … and that extends to real problem solving in the real world.”