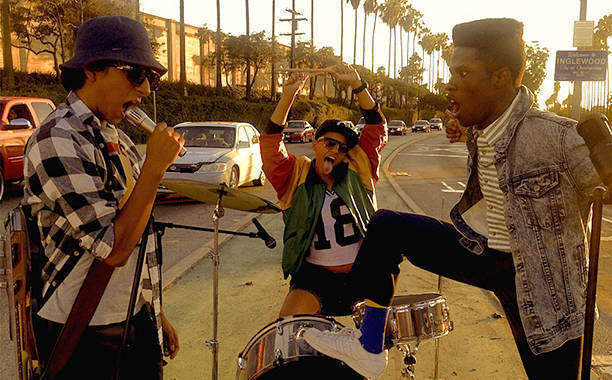 It’s a familiar premise at first glance: Teenagers growing up in a rough neighborhood deal with gangs, drugs, and crime. But director Rick Famuyiwa’s Dope, which premieres at Sundance later this week, rejects the traditional narrative. “The main character, Malcolm (Shameik Moore) is a Nineties hip-hop geek,” Famuyiwa says of Dope‘s protagonist, a modern-day teen who lives in Inglewood, Calif. “He isn’t a drug dealer or a gang banger. He’s into all types of music, and video games and computers.

We’ve seen a lot of films about everything else in these neighborhoods—the crime, the athletes, the gangs—but you don’t see films about the regular kids who have to survive in these streets.” Partly inspired by Famuyiwa’s own upbringing in Inglewood, Dope follows Moore and a cast of promising young actors through The Bottoms, one of the town’s tougher areas. Famuyiwa calls the film a “sort of homage” to indie directors like Paul Thomas Anderson and Wes Anderson whose “personal, character-driven aesthetic” shaped his cinematic voice.

The director also observed “how Nineties hip-hop has influenced the style and aesthetic” of “the younger generation of MCs” that includes Odd Future, A$AP Mob, and Joey Bada$$’s Pro Era. A$AP Rocky even requested an audition after he helped his girlfriend Chanel Iman practice her part; he scored a supporting role, and Famuyiwa loved his “natural charisma and ability.” On top of that, pop chameleon Pharrell contributed by writing four songs for the fictional garage band that Malcolm and his friends create.

“It was exhilarating to sit there in the studio with Pharrell as he composed this music,” Famuyiwa says. “I’d tell him about Malcolm and then he’d disappear to his magic lair, or wherever he goes, and then he’d have a song about it and it’d be amazing. I think he was key in helping me figure out who these kids are in this world.”

Famuyiwa says Dope‘s unique perspective makes it special. “There’s an optimism about these kids, and they’re connected to the world by social media and modern technology that a kid like me growing up in Inglewood 20 years ago didn’t have,” he says. “I’m excited for the Sundance crowd to see this movie. On the surface it might seem familiar, but I think people will be surprised by what this film is.” Watch EW‘s exclusive premiere of the trailer for Dope below.

Malcolm is a high school geek with a high-top fade, carefully navigating life in The Bottoms, one of the toughest neighborhoods in Inglewood, California. He and his fellow outcasts share a voracious appreciation for all things ’90s hip-hop, opting to sport Cross-Colours and Z. Cavariccis at the risk of being clowned at school. He dreams of attending Harvard, but first he has to make it home every day. When a drug dealer takes a shine to Malcolm and invites him to his birthday party, Malcolm’s crew is swirled into a hilarious blender of offbeat characters and bad choices where redemption can only be found in Bitcoin.