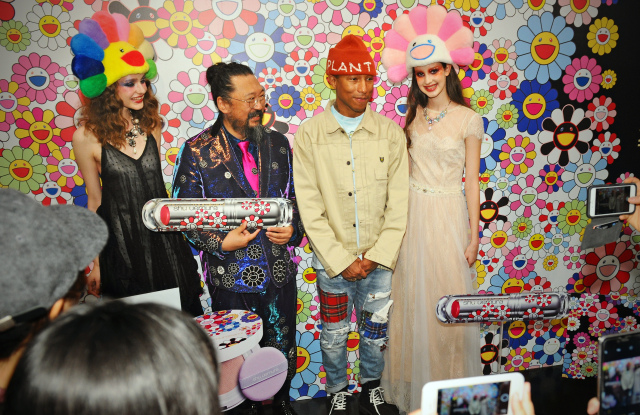 Japanese artist Takashi Murakami feted his collaboration with Shu Uemura Friday night, and he even hosted a surprise guest: Pharrell Williams. The decision by Williams to attend the event, held at the upscale Omotesando Hills shopping mall, was a last-minute one, and he stayed only long enough to pose for a few photos with Murakami. Still, it was enough to get the crowd excited and the venue was buzzing about his appearance long after he was gone.

For his part, Murakami seemed to be enjoying the festive atmosphere, posing with the event models and his Jack Russell terrier at various locations throughout the venue. Dressed in a shiny purple suit and bright pink tie accented with his signature daisy flowers, he smiled and waved to both the cameras and the customers who attended the party. The event also included a live “makeup show,” in which four different artists put the finishing touches on models’ looks. Guests also could win prizes by trying their hand at mini golf and carnival-style games.

Murakami’s daisies appear on the packaging for Shu Uemura’s holiday collection, which includes eye shadow and blush palettes, cushion foundation, lipstick, eyeliner, cleansing oil and more. In Japan, the products have been combined and are sold as various sets, each of which includes a Murakami-designed bag or pouch. They will be launched in two rounds, with the first available exclusively at the brand’s Omotesando Hills flagship from Friday, and rolling out to other stores from Tuesday. The second series of products will hit stores Nov. 16.